World Burger Tour kickstarts at Hard Rock Cafe from June 1, are you ready to take a bite?

Hard Rock Café’s is celebrating the season with a menu that will showcase local legendary burgers from all over the world. 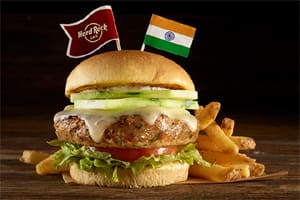 Are you a burger lover? If yes, then a carnival awaits you! Take your taste buds for a roller coaster ride with Hard Rock Cafe’s World Burger Tour that kickstarts on 1, June 2016 and ends on July. The tour will bring myriad variety of burgers from across the world in your plate.

Hard Rock Cafe’s is celebrating the season with a menu that will showcase local legendary burgers from all over the world. To name a few- Mediterranean veg burger, Caribbean Veg burger, Istanbul Kafta chicken burger, Indian tandoori chicken burger and others.

With exquisite ingredients Hard Rock gives chefs at their cafes the freedom to create a unique Local Legendary Burger that captures the flavors of their city.his year more than 160 local burgers were evaluated by Hard Rock’s culinary team with fan favorites selected to headline the World Burger Tour menu

You can pair up the sumptuous burger with side kicks such as masala fries and cocktails like Limona Bomb, Watermelon Hoedown, Melonpalooza among others.

The burgers are priced Rs 399 onwards, while the cocktails are available from Rs 499. You can savour the burgers at all Hard Rock Cafe India locations.

As part of the World Burger Tour, visitors can also participate in Burgerthon – an inter-cafe pan India burger challenge testing you on your burger-gobbling skills wherein the fastest to finish the legendary burger across India will be declared winner.

Along with an Eric Clapton guitar, Hard Rock owns the world’s greatest collection of music memorabilia, which is displayed at its locations around the globe. Hard Rock is also known for its collectible fashion and music-related merchandise, Hard Rock Live performance venues and an award-winning website.The company owns, operates and franchises Cafes in iconic cities including London, New York, San Francisco, Sydney and Dubai. HRI also owns licenses and/or manages hotel/casino properties