Legal proceedings in India against beleaguered businessman Vijay Mallya has now come to haunt his US-based brewery firm, which is banking on USD 1 million bridge loan promised by his holding firm for survival. 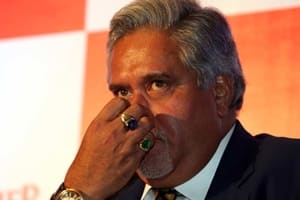 Shares worth Rs 3,000 crore, of United Breweries Limited and United Spirits Limited which are companies owned by Vijay Mallya has also been attached.(Express Photo)

Legal proceedings in India against beleaguered businessman Vijay Mallya has now come to haunt his US-based brewery firm, which is banking on USD 1 million bridge loan promised by his holding firm for survival.

This is probably the first admission by the US-listed firm, which is struggling for funds and has been served ‘default’ notices by lenders in the past, about the potential impact of Mallya’s legal woes in India on its own fortune.

If it fails to secure funds, Mendocino said, the lenders may take “recourse against the applicable pledged collateral which includes the company’s real and personal property in the US and the UK”.

In its latest quarterly filing with the US markets regulator Securities and Exchange Commission (SEC), Mendocino further said, “The board of directors of UBHL during this quarter has approved debt financing to the company in the form of USD 1,000,000 of bridge loans.

“If UBHL does not consummate such debt financing, it would have a material adverse effect on the company’s financial condition and the company’s ability to continue to operate.”

The company disclosed that its total assets declined to USD 16 million as on March 31, 2016 — lower than the total liabilities worth more than USD 18 million.

Mallya got a pay package of over Rs 1.7 crore in 2015 from this US-based company, more than half of which was paid by Mendocino to him for “promoting” the company’s beer brands.

Mallya serves as Chairman of the board of directors of the company, which has an exclusive licence to brew and distribute Kingfisher Premium Lager in various countries. Besides, it produces and sells a number of craft beer brands.

The two largest shareholders of Mendocino are United Breweries America (UBA) and Inversiones, both of which are controlled by Rigby International Corp, a company registered in the British Virgin Island.

Rigby, in turn, is a wholly-owned subsidiary of UBHL.

Mallya, who is at the centre of a major controversy for the huge loan defaults by his group in India, controls over 68 per cent shareholding held through UBHL in Mendocino.

However, MBC does not appear to be doing well financially and has requested for funds from the parent, while options being explored include merger and asset sale.

Mallya’s business empire once included companies across liquor, fertilisers and airline businesses among others. His financial troubles began to mount after erstwhile Kingfisher Airlines had to be grounded under big losses and huge debt.

While lenders in India are seeking to recover total dues worth over Rs 9,000 crore from him, Mallya recently signed a lucrative exit deal with Diageo, to whom he had earlier sold a majority stake in United Spirits, and said he intended to spend more time in England.

Interestingly, his no-compete agreement with Diageo excludes the UK market.

Global banking major RBS has also threatened to terminate a credit line and all other banking services provided to his European beer venture.

This has forced Kingfisher Beer Europe Limited to look for alternative avenues to replace the credit line and other banking facilities provided by RBS.

In its SEC filing, Mendocino said UBHL had issued a letter of comfort last year, agreeing to provide funding on an as needed basis to ensure that the company is able to meet its financial obligations as and when they fall due.

In December last year, MBC also engaged Gordian Group as an investment banker to assist it in evaluating and exploring “certain strategic and financial options and transactions” including possible debt or equity capital financing, merger, consolidation, joint venture or sale of assets.

The company intends to use these proceeds to repay the amount owed to lenders.

“The current revenue from operations is insufficient to meet the working capital needs of the company over the next 12 months,” it said, while adding that UBHL has been requested to make a capital infusion.