Bora, who was Executive Director at Oil and Natural Gas Corporation (ONGC) before this appointment, is the first full-time Chairman of OIL in more than a year. 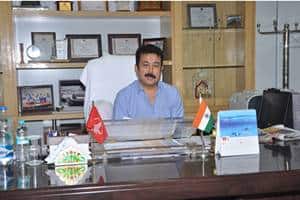 Utpal Bora today took over as the Chairman and Managing Director of Oil India, the country’s second-biggest state-owned oil and gas explorer.

Bora, who was Executive Director at Oil and Natural Gas Corporation (ONGC) before this appointment, is the first full-time Chairman of OIL in more than a year.

He was picked for the top job by a search-cum-selection committee headed by Cabinet Secretary P K Sinha after three failed attempts to find a suitable person by the government headhunter, the Public Enterprise Selection Board (PESB).

“Bora has a rich and varied experience of over 33 years in the exploration and production (E&P) sector. He served in various capacities at ONGC, including ONGC Videsh Ltd, the international branch of ONGC,” it said.

He was selected from among more than half a dozen candidates interviewed by the panel.

OIL Director (Finance) Rupshikha Saikia Borah, who was previously selected for the top job by PESB but rejected by the Prime Minister’s Office (PMO), was not considered even though she had applied again.

PESB in its first round of interview in November 2014 found Borah and five others unsuitable to replace S K Srivastava, who retired on June 30, 2015.

It, however, selected Borah when it conducted a second round of interview in February 2015. This led to Prime Minister’s Office (PMO) asking what had changed between November 2014 and February 2015 that made Borah suitable from unsuitable.

Following this, the selections were scrapped and fresh applications called. None of the 12 candidates, including Borah, were found suitable in the third round of interviews done by PESB in September 2015.

After Srivastava’s retirement, the Oil Ministry named senior bureaucrat U P Singh as the acting CMD of OIL.

After Singh was transfered to the Water Resources Ministry a few weeks ago, Ajay Prakash Sawhney, Additional Secretary with the Petroleum Ministry, was given additional charge of Oil India.

OIL will be the second large public sector unit to have its head selected through a search committee. In February, Gurdeep Singh, MD of Gujarat State Electricity Corporation, was appointed CMD of NTPC, the nation’s largest power producer.