US companies clamour to do business in untouched Cuban market

Benefits both: Several American giants are looking to enter the Caribbean nation while Cuban induatry too has a market in the US 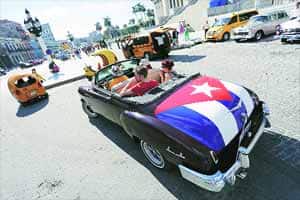 PepsiCo wants in. So do Caterpillar and Marriott International.

Within hours of US President Obama’s historic move to restore full diplomatic relations with Cuba, companies in the United States were already developing strategies to introduce their products and services to a market they have not been in for the better part of 50 years — if ever.

“Cuba is a potential market for John Deere products and services,” Ken Golden, a spokesman for Deere & Company, a leading maker of farm and construction equipment based in Illinois, said by email.

But while there may be robust opportunities for some companies, especially those selling products or goods that could be viewed as enhancing Cuba’s own domestic production or helping to develop its underused resources, other companies could get the cold shoulder.

“For a company like McDonald’s, the Cuban government is going to ask, ‘How does McDonald’s coming in and selling hamburgers help the economy of Cuba?’ “ said Kirby Jones, founder of Alamar Associates, which has advised companies on doing business in Cuba since 1974. “It’s just not going to be like other regions where you see a McDonald’s on every corner.”

Despite Cuba’s long stagnation and isolation from the global economy, the potential trade opportunities go both ways. While some Americans will be itching at the opportunity to obtain the famed Cuban cigars more easily, the country also has a surprisingly robust biotechnology industry that makes a number of vaccines not now available in the United States. Another hot spot for the economy could be mining, as Cuba has one of the largest deposits of nickel in the world.

While United States companies are eager to establish a toehold in the country, many expect former Cuban businessmen and leaders in the rum or sugar industries to lead the charge.

“The Cuban people have immense pride in their history, and those from the expatriated community and those who have continued to live in Cuba will seek to return to the international stage the best way that they can,” said Richard Harris, a vice president of operations and product development for the luxury travel company Abercrombie & Kent, which has arranged trips to the Caribbean nation. “Bacardi disassociated itself from Cuba, but I’m sure somebody must be thinking, ‘How can we re-establish the brand with its heritage?’ “

President Obama’s move to open relations between Washington and Havana for the first time in 54 years was widely seen as the signal for trade to resume, but, in fact, the United States is already the fourth-largest exporter to Cuba, behind China, Spain and Brazil.

Last year, the United States exported $359 million worth of goods to Cuba, compared with a high of $711 million in 2008, according to American government statistics.