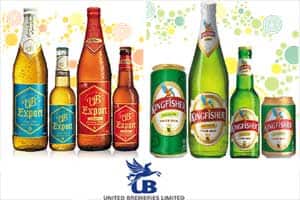 Shares of United Breweries Holdings Ltd were trading at Rs 20.85 in mid-day trade, down 8.15 per cent from previous close on BSE. (Source: UBL)

United Breweries Ltd (UBL) today reported 4.68 per cent decline in net profit at Rs 122.81 crore for the first quarter ended June 30, 2015, against Rs 128.84 crore during the same period of the previous fiscal.

The company also announced that Shekhar Ramamurthy will replace Kalyan Ganguly as its Managing Director with effect from August 1, 2015.

Ganguly has decided to retire and pursue other interests, the company said in a filing to the BSE.

“With the industry lagging behind with a 2 per cent drop in volume against last year’s first quarter, UBL volume ended 1 per cent below previous year,” the company said.

It further said: “Inspite of a revenue increase by 4 per cent driven by selective price increases taken by the company in key markets, profit before tax development show minus 3 per cent because of an extra ordinary benefit included in first quarter’s figure last year, being a one-time government subsidy of Rs 10.9 crore.”

Shares of United Breweries were trading at Rs 1,011.90 on the BSE in the morning trade, up 0.37 per cent from its previous close.

While Frans Erik Eusman has been appointed as an additional director on the Board of the company, Roland Pirmez has resigned from the Board, the filing said.