With the govt drawing up an ambitious road map, there’s a lot riding on Sagarmala’s implementation 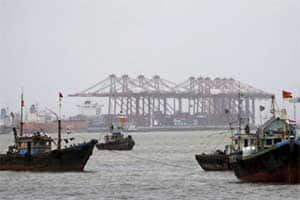 The Indian port sector is at a crossroads. Relatively untapped all these decades as far as its potential to contribute to economic development is concerned, it is poised for the big leap over the next decade, if only the Union government’s ambitious roadmap translates into change at the ground, nay, port level. This holds for the long term though. In FY16, major ports, with a volume of 606 million tonnes, registered moderate 4% growth over the previous fiscal, largely due to a slowdown in coal imports. A decline of 22% in iron-ore cargo volumes was another factor behind the subdued performance—in contrast, cargo throughput at the major ports for the first two months of FY17 has registered 6% growth, driven by a five-fold increase in iron ore cargo volumes.

But there was something to cheer about in terms of infrastructure upgrade in FY2016, which saw major ports adding 94 MTPA capacity—historically the highest ever in a year—to take aggregate capacity to 965 MTPA against 871 MTPA at FY2015 end. A total of seven mechanisation projects were also awarded in 2015-16, involving an estimated investment of R2,560 crore and capacity addition of 57 MTPA. The year also  saw progress on setting up of four greenfield ports.

It is such infrastructure creation that is expected to lead to a paradigm shift over the long term, with the Union government showing keen intent to develop ports and address the constraints faced by the sector.  Its Sagarmala initiative has moved ahead from the drawing board stage and the National Perspective Plan (NPP) was unveiled in April this year.

Successful implementation of Sagarmala can be a game-changer in terms of savings, employment generation, and value creation but the challenges in the way are just as formidable, with as much as R4 lakh crore of investment needed in infrastructure. It is a no-brainer that the private sector would need to play a huge role if such mammoth investment is to materialise. And this is not likely to happen unless the structural and systemic issues hindering growth are resolved.

Commenting on the road map, Jaideep  Ghosh, Partner &  Head of Transport, KPMG in India says, “The overhaul of India’s port infrastructure was long overdue. The Sagarmala initiative is quite grand in its scope though it might be too ambitious to implement in a decade’s time. It seems a better idea to develop port-based clusters on a pilot basis at one or two places before the plan is implemented at a pan-India level.”

With the intent of clearing regulatory hurdles, the Ministry of Shipping has released a draft of the Central Port Authorities Act 2016 that seeks to provide more autonomy to major ports, enabling them to function like corporate entities. It does away with the regulation of tariff by the Tariff Authority for Major Ports (TAMP), delegating the power  to the Board of the port authority. Experts say this doesn’t address the problem since the board would continue to be governed by the 2005/2008 guidelines which are flawed. “Only the uniform application of 2013 guidelines to all existing terminal operators will provide the requisite impetus for advanced technology in the existing terminals to improve operational efficiencies and provide better services to the trade,” says
K Ravichandran, Senior Vice President & Co-Head, Corporate Ratings, ICRA.

Aiming to increase port capacity from 1,400 MT to 3,000 MT by 2025, the Union government is also revising the Model Concession Agreement (MCA) used by major ports while entering into PPP projects with private players for cargo-handling facilities. The new MCA aims to boost investor sentiment through better allocation of risks between the state and private firms.

Regarding the overall prospects for the sector, Ravichandran says the uncertainty associated with particular cargo categories like imported coal and containers renders the outlook subdued in the near to medium term. However, the outlook for cargo growth continues to be strong over the medium to long term, driven by the 3Cs—coal, crude oil, and containers. The implementation of Sagarmala could lead to increased cargo for the ports; however, several challenges remain given the scale of the project and significant funding resources and PPP participation required to meet its goals, he says.