Gains in the internet company’s stock price have surged the pay package of Yahoo’s CEO. 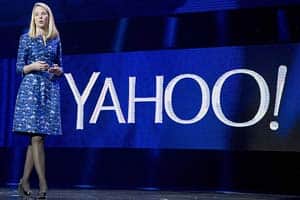 The value of Yahoo CEO Marissa Mayer’s pay package surged last year, mostly due to gains in the Internet company’s stock price that came despite concerns about the overall health of Yahoo’s business.

According to a regulatory filing, Mayer’s 2014 compensation increased 69 percent to $42.1 million. Her salary was unchanged at $1 million but the value of some of her stock and option awards jumped. The company said a large part of the increase came from performance-based options that were part of Mayer’s recruitment package.

Those awards were worth $15 million when they were approved, but Yahoo says their value has risen to about $40 million. They are counted as part of Mayer’s 2014 compensation because the performance goals connected to the stock were set that year.

Yahoo hired Mayer away from Google Inc. in July 2012. Yahoo shares have nearly tripled in value during Mayer’s tenure, mostly because of its holdings in Chinese e-commerce company Alibaba Group and Yahoo Japan rather than Yahoo’s core business.

The company invested in Alibaba a decade ago and its stake is now worth close to $32 billion. But even though advertisers are shifting more of their spending to the Internet and mobile devices, Yahoo is still struggling to increase its revenue and it lags behind Google and Facebook in mobile revenue.

Earlier this month, Yahoo reported its first-quarter results and pleased investors by saying it will cut costs and consider spinning off its stake in Yahoo Japan.

The Sunnyvale, California, company said in January that it will spin off its stake in Alibaba Group Holding Ltd. later this year. The move is designed to avoid a big tax bill.

The Associated Press calculation of executive compensation is based on a company filing with the Securities and Exchange Commission. It aims to isolate the value company boards place on CEOs’ total compensation package. It includes salary, bonus, incentives, perks and the estimated value of stock options and awards.