Samsung Galaxy Tab S2 is priced at Rs 39,400. With its powerful display and fast processor, it could be the best Android tablet available in the market today. 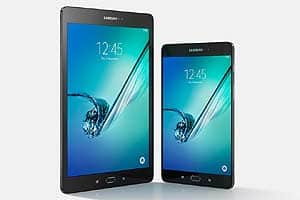 Samsung Galaxy Tab S2 is priced at Rs 42,000. With its powerful display and fast processor, it could be the best Android tablet available in the market today.

Korean electronics giant Samsung recently released its flagship 9.7″ tablet – Galaxy Tab S2 – priced at Rs 39,400. The new device is redesigned and an upgrade over the Galaxy Tab S 10.5. Here is our analysis:

The device-maker has made this tablet thinner and lighter than its predecessor, which has resulted in making the new device a more comfortable product to hold for longer durations.

The display is superior and yet less expensive. The technology, called Active Matrix Organic LED, allows each pixel in displays of this type to glow on its own; so no back light is necessary, and screens can be easily used outdoors, even in direct sunlight.

The tablet has a density of 264 pixels per inch (ppi), which is fairly high keeping in mind the competition. While the iPad Air 2 has near to same ppi, the Microsoft Surface 3 has 213 pixel density.

The tablet comes with 4:3 aspect ratio instead of 16:10 (available in the Tab 10 S 10.5) which means that the display is squarer. The square display might be a good idea as it makes reading easier and makes the tablet more suitable for productivity.

Samsung has added support for running two applications side by side. The limitation is that because this isn’t a standard feature of Android, there are only a handful of apps that support Samsung’s Split View.

In terms of its shooter, the Tab S2 9.7 rear camera does a decent job of taking non-demanding pictures. The front camera is good for video calls or conferencing.

The tablet, which comes with 4G LTE-supported calling facility, sports a fingerprint sensor and has good battery backup.

What doesn’t work for the tablet?

The build quality seems to have taken a hit with the plastic rear but otherwise the product looks sturdy and compact with its metal rims and upper glass body.

The screen size has been toned down from 10.5″ to 9.7″. Although a squarer display is a boon for productivity, watching video on the 16:10 display is better.

Although Samsung has put in its Split View in the tablet, more productive combinations are absent as Android in itself doesn’t support the feature. A good example of the combination would be a browser and Microsoft Word.

The rear camera has low performance when it comes to moving objects, and there’s no flash.

Verdict: Reasonably priced in comparison to its rivals, the Tab S2 with its powerful display and fast processor could be the best Android tablet available in the market today.