The S22 could end up being the phone of the year. 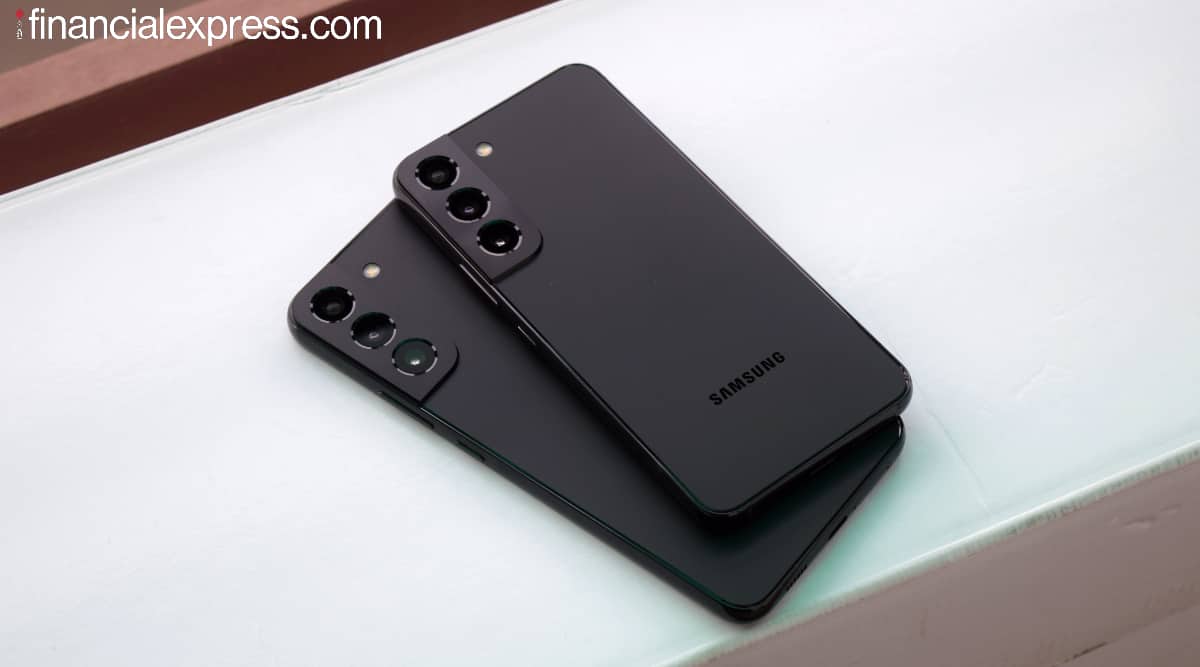 Let’s begin by addressing the elephant in the room, shall we?

The Galaxy S22 and Galaxy S22+ don’t have terrible battery life. In fact, it’s better than we expected. It is bewitching because Samsung’s go-to Android flagship phones of 2022 have smaller batteries and substantially more powerful – albeit theoretically more efficient – hardware than their predecessors. The S22+ has a 4,500mAh battery (versus 4,800mAh in the S21+) while the S22 a mere, 3,700mAh (versus 4,000mAh in the S21).

Both, the S22+ and smaller S22, have more or less the same battery life – averaging around 5 hours of screen-on time on heavy use. We’re particularly impressed with the way the S22 performs. Punching way above its size class, the phone lasted 14 hours and 51 minutes in our video loop test (the S22+ got to 13 hours and 35 minutes). Just looking at it made us, kind of, sort of wish, the S22+ was slightly better. There is some room for improvement there. The S22+ is beaten by the iPhone 13, by a good margin.

There are many Android phones in the market today – notoriously packing ginormous batteries to the tune of 5,000mAh, even 6,000mAh – that obviously have better battery life than the S22 duo. Some can charge much faster, too, even as the S22+ tops out at 45W (the S22 can pull only 25W). But that is not the conversation these phones have to get into because they’re about more than one or two flashy features. They’re complete smartphones bearing strong Samsung legacy. People wait for it to come out with these phones, year after year, because in them, they see their next potential smartphone purchase.

Having used them thoroughly, for over two weeks now, we can go out on a limb and say, the S22 and S22+ are some of the nicest phones that Samsung has ever made. But if we were to pick one, specifically, it’s the S22 that’s blown our minds away. It is the best Android phone you can buy today. Period.

The S22+ and S22 are smaller than their predecessors. While the S22+ is 6.6-inch (versus 6.7-inch), the S22 is a 6.1-inch phone (versus 6.2-inch). They have a new design. Generally speaking, they’re more rectangular with a flat frame—this is made of armour aluminium, same as the Fold 3 and Flip 3—vaguely reminiscent of the iPhone 12 and iPhone 13.

Unlike last year, Samsung is using a glass back on both, the S22 and S22+ (the S21 infamously had a polycarbonate back). This is Corning Gorilla Glass Victus+ and is smooth to the touch. The colour scheme is tad muted. You get Phantom Black, Phantom White, and Green options. The black version—we have for review— looks stealthy (but this is not the same version the S21 Ultra came in) and does not attract a lot of smudge and fingerprints.

The contour-cut aesthetic is gone although not entirely. The somewhat S-shaped camera assembly isn’t fused with the frame, anymore, in this rendition. This leaves you with a visible camera bump that sticks out, more, than the module in the S21-series where it was relatively more concealed and eye-catching at the same time.

Samsung has cleverly accented the whole backplate – in the S22 and S22+ — with a bold outline matching the colour of the frame (which is glossy). The clever bit is that it’s not overdone. It’s just the right amount making the S22+ and S22 visually striking and distinctly original.

The focus was clearly on making these phones as compact and pocketable as possible. The S22 and S22+ are some of the most well thought out—as well as well put out—phones in the market today. The S22, in particular, weighs only 168g and is an absolute joy to work with without compromising on core competency. The S22+ is also not very far behind, though it can be a handful sometimes owing to Samsung’s new flat-edged design.

Regardless, both phones are textbook Samsung: nice to look at, and luxurious to hold. You also get IP68 water and dust resistance.

The S22+ has a slightly more powerful screen than the S22 (which is probably also a reason behind its middling battery life). The Dynamic AMOLED 2X display here has a 1080p resolution (2340x1080p) and a variable 48Hz-120Hz refresh rate. Like the S22 Ultra, its panel can peak 1,750nits. It is ridiculous that a smartphone can even pull this kind of brightness. For some context, the pro iPhone 13 models top out at 1,200nits.

The S22 has the same resolution and variable refresh rate but it can go only up to 1,300nits. Both phones support 240Hz touch sampling (in game mode), have Corning Gorilla Glass Victus+ protection and a hole punch cut-out at the centre. Biometrics are handled by an ultrasonic fingerprint reader which is blazing fast and very accurate.

The display on-board the S22 and S22+ works as advertised. These are some of the nicest screens to consume content. Samsung has greatly reduced the bezels, too. They’re practically non-existent.

The biggest update is coming by way of core hardware, though. Both the S22 and S22+ are running the Qualcomm Snapdragon 8 Gen 1 chip, much like the S22 Ultra. You get up to 8GB RAM and up to 256GB storage—this is non-expandable.

Both S22 and S22+ are pocket-rocket phones with top-of-the-line performance across the board. That sleek chassis does come at a cost. The phones can heat up rapidly when stressed, especially while graphics-intensive gaming and photography. The S22 – owing to its tighter dimensions—can work up quite a sweat and throttle from time to time to bring the temperature down. But we won’t call it an issue as it’s well within permissible limits. Benchmarks might be able to pick on them – because obviously—but none of this translates to any noticeable difference in the real world. Speaking of which, while the S22+ scored 8,75,087 on AnTuTu, the S22 achieved a score of 8,22,780. Both phones were able to complete its 45-minute stress test without any major red flags.

The S22 and S22+ boot Android 12-based One UI 4.1 and will get four major OS updates and five years of security updates, Samsung has confirmed. That extended support is easily there biggest selling point putting every other brand (but Apple) on notice. Yes, these phones will require you to sift through multiple settings to get to something every once in a while, and the bloat/spammy notifications situation could be better but aside from Motorola’s stock-ish look and feel, this is one of the best versions of Android available in the market at the time of writing with an eclectic mix of features without stripping off any of its core functionality.

Take Material You theming for example. You don’t get it in the iQOO 9 Pro for some reason. Motorola does include it in the Edge 30 Pro, but the implementation is a bit haphazard. Samsung does it in the same way Google does it (though icon theming is limited to its core apps currently). One UI in 2022 is basically super-charged Android and we quite like it. Samsung’s rollout schedule, also, seems in overdrive right now with both S22 and S22+ rocking the March security patch (even as a phone like the Motorola Edge 30 Pro runs the January 2022 patch).

The same level of attention has gone into tuning the cameras in the two phones especially under low light and video recording. Both phones have the same triple camera setup which is a combination of 50MP main sensor that sits behind an optically stabilised f/1.8 lens, a 12MP sensor behind an ultrawide-angle lens with f/2.2 aperture and 120-degree field-of-view, and another 10MP sensor behind an optically stabilised f/2.4 aperture 3x telephoto lens. Three things really stand out for photos shot with the S22/S22+:

— HDR performance and dynamic range are simply off the charts.

— Colours are nice and punchy (but not overtly saturated), details are impressive.

More importantly, the ultrawide and telephoto are not spec fillers but actually competent with the main sensor on almost every level, be it colour science, detail, or sharpness. No other smartphone at the S22/S22+’s price point gives you as much versatility that you can –also— put to good use and there are some really formidable camera phones in the market right now.

We’re more impressed with the S22/S22+’s video recording chops though. All the four cameras can shoot at up to 4K@60fps (the main sensor can shoot at up to 8K@24fps) and you can switch between any of them on the fly. For years, the iPhone has been the gold standard for filming – on a smartphone – but Samsung is getting very close this year and, in some areas, like low-light videography, it’s even beating Apple at its own game.

Samsung’s 10MP front camera can pull more details in selfies, too, compared to an iPhone 13 especially against tricky backgrounds and harsh lighting. The iPhone 13 is generally better at portraits.

Samsung has hit gold with its new batch of Galaxy S phones. There may be an “ultra” in the lineup—that is obviously the best phone that Samsung makes today—but the S22 and S22+ will be the best phones for most people. The default Android flagships, if you will. In the higher echelons, you also have the Fold 3 that many people would have their eye on making the decision of picking one over the other, more a matter of preference than anything else. There will be a Fold 4 coming later this year, too, hopefully raising the stakes further.

The S22 and S22+ don’t have to deal with any of that. In a way, they have no competition whatsoever, making them an easy recommendation for anyone looking for a great Android smartphone with the best of specs, premium design, compelling cameras, surprisingly good battery life, and software support like no other. The S22 is more value from every perceivable angle with price in India starting at Rs 72,999 (8GB/128GB). Samsung phones get discounted fast so the S22’s proposition is only going to get better with time.

The S22+, starting at Rs 84,999 (8GB/128GB), is for those looking for a slightly bigger screen and battery (though battery life gains are not that great, so to say), in addition to Wi-Fi 6E and ultra-wideband (UWB). We feel, Samsung could have priced it bit lower.