Everything else though, leaves you asking for more. 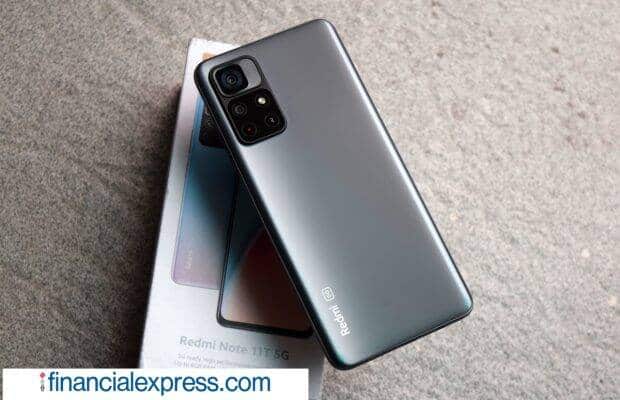 It’s a little difficult to put a rope around the Redmi Note 11T 5G’s exact origins. The easiest way to describe it, from a pure Indian context would be that it’s a rebranded Redmi Note 11 5G from China. But there are a few differences. Say for instance, the Redmi Note 11T has Corning Gorilla Glass 3 and IP53 dust and splash-resistance rating, starts with 6GB RAM/64GB storage and supports up to 1TB expansion cards. It can also work with more 5G bands—seven versus four in the Redmi Note 11—on paper that is. Those differences, though they may seem minor, are often lost in translation.

The point is, Xiaomi continues to jam-pack its Redmi phones with good—often better than the rest of the world—hardware and somehow also price them at very competitive prices in India, despite the many challenges that befall the industry today. The Redmi Note 11T 5G is no exception. There’s also something called as a “5G tax” that must be taken into account while designing a product like this, something that Xiaomi India Chief Operating Officer Muralikrishnan, too, acknowledged while speaking to Financial Express Online recently.

Now that we’ve addressed the elephant in the room, let’s move on to the next possible bone of contention. This phone is also a successor to the Redmi Note 10T 5G—Redmi’s first 5G phone—which was launched barely five months ago. To that, there’s only one plausible counter argument. The Redmi Note 11T is a better phone in every sense of the word and not just another “S” update like some rival phones. Though, to be completely fair, the Redmi Note 10T wasn’t such a great product to begin with and therefore, a successor was the need of the hour considering how fast competition is moving especially in the realm of 5G.

The design of the Redmi Note 11T is largely inspired from the Redmi 10 Prime. The only difference is that the Note 11T looks and feels nicer, more premium if you will—though still all-plastic. Unlike the Prime’s curved glossy exterior, the Note 11T uses soft-touch matte and the sides are a tad boxier—this makes it comfortable to grip and easy to maneuver. The back is more resistant to smudge and fingerprints while a subtle gradient breaks visual monotony to give the phone an eye-catching yet classy look.

It may not be as visually striking or high-end as the Redmi Note 10 Pro Max, aesthetically speaking, but it’s easily one of the most good-looking phones around, at its price point. Though if we were to nit-pick, Xiaomi lifting the camera island as is from the Redmi 10 Prime—which has a 4-camera array—and replacing two openings with a dot and AI branding is downright lazy work. Not to mention, it screams “cost cutting” since the primary and secondary cameras are virtually the same as the Prime.

Regardless, the all-round design is a step-up from its predecessor, the Redmi Note 10T, which more than compensates for the slightly higher asking pricing.

The display is a mixed bag, however. It’s larger, at 6.6-inch (versus 6.5-inch in the Note 10T), with 1080p resolution and hole punch cut-out. The panel, again, is IPS LCD with 90Hz “adaptive” refresh rate but there are two big caveats. The Redmi Note 11T does not get very bright and viewing angles are average at best. Then when you factor in Xiaomi’s aggressive software—MIUI—algorithms, you’re left with an anemic display. Both Realme 8s and Lava Agni 5G, its two direct rivals, offer far better outdoor legibility when you’re out and about.

Indoors, though, there’s not a lot to complain here especially when it comes to colours and content consumption-prowess. The phone is Widevine L1-certified, something that’s missing in the Lava Agni. As a bonus, the dynamic refresh rate allows the display to switch between 50Hz for static, 60Hz for videos and 90Hz for scrolling and gaming, something that should help eke out more from the battery. This works as advertised, though the Note 10T’s panel could go even lower, up to 30Hz.

The Redmi Note 11T is now the third phone in India to launch with MediaTek’s new 6nm Dimensity 810 chip, the other two being the Realme 8s and Lava Agni. As we noted in our Realme 8s review, the real-world differences between the Dimensity 810 and Dimensity 700 inside the Redmi Note 10T (or Realme 8 5G) have more to do with efficiency and CPU speed, and absolutely nothing to do with graphics. In other words, you can expect slightly faster—and possibly sustained—performance and improved battery life. The GPU is the same in both and isn’t cut out for graphically intensive gaming.

The Note 11T is a classic example to prove not all phones with the same hardware are created equal. There’s more to a phone than just the chipset and just because a certain phone has a certain chipset that is being marketed in a certain way, it doesn’t mean that it will also perform as such. If it were the case, the Note 11T, Realme 8s, and Lava Agni, all would perform equally—but they don’t.

But even more importantly, the Realme 8s was able to sustain its peak performance and hold on to it for longer duration and without breaking any sweat, as conclusively proven by our repeated CPU Throttling test(s). The Note 11T tends to throttle, sometime alarmingly so, suggesting lack of proper optimisation.

Now, if you’re one to argue that benchmarks tell only half the story, you’re absolutely correct. In day-to-day tasks, you’re most likely to never notice these differences but be sure that they exist. If you’re one to multitask a lot and happen to be a demanding user—that’s not to say, you’re a gamer—the Redmi Note 11T isn’t cut out for you. That’s not to say it lags or has bad software, it’s just that it needs more optimisations. Xiaomi could fix this with an update, so fingers crossed.

But software on the whole remains a slippery slope for budget phones like this even today. Here’s what Muralikrishnan had to say about future software updates specifically with regards to the Redmi Note 11T 5G:

And before you ask, the Redmi Note 11T 5G will not receive MIUI 12.5 Enhanced update in India, Xiaomi has confirmed to Financial Express Online.

For what it’s worth, MIUI has come a long way over the years. Its latest version, aka MIUI 12.5 is touted as the “cleanest UI possible” since Xiaomi lets you—finally—uninstall a lot of apps or at least hide them, something that was not possible before. It is fast, more polished, and offers a lot of customisation options to tinker around with. The Redmi Note 11T 5G runs MIUI 12.5.1 with the November Android security patch at the time of writing this review.

You get up to 8GB RAM and 128GB UFS2.2 storage which is expandable via a hybrid slot. There is also a RAM booster feature in the phone, that could be useful down the line, but it’s hard to say in a new phone.

Battery life is stellar. The Note 11T 5G’s 5,000mAh battery will easily last a day and then some for even the most demanding users. In fact, this phone is the king of battery life when compared with the Realme 8s and Lava Agni. The phone supports 33W fast charging.

If you’re wondering why we haven’t spoken about the cameras yet, it’s because, they’re just about fine and definitely shouldn’t be the reason to get this phone. There is a 50MP primary camera (unspecified sensor that sits behind an f/1.8 lens) on this phone paired with another 8MP ultra-wide-angle camera (f/2.2, FOV 119-degree)—a setup very similar to the one on the Redmi 10 Prime with the exclusion of two 2MP depth and portrait cameras of course.

Photos are a hit and miss. Details aren’t anything to write home about. So is the dynamic range. The primary and secondary cameras, both, take passable photos in good light that look good on the phone’s screen and should suffice for social media. The wide-angle-camera generally takes soft photos, even in good light, and colours lack consistency with main camera. Low-light/night mode photos are the phone’s weakest link, an area where the Realme 8s does slightly better.

The 16MP front camera (f/2.45) captures good-enough selfies when lots of light is available but quality goes for a complete toss as intensity of light goes down.

Video recording tops out at 1080p@60fps in the Note 11T. Recorded footage, again, is a mixed bag.

Xiaomi is usually known to be the first to do something new and exciting, whether it be making high-resolution screens and cameras go mainstream or transforming the way we look at budget phones today, which invariably means, in many cases, it has been used to getting the first-mover advantage. 5G seems to be a whole different ballgame though.

Not only has it been a little late to join the “affordable 5G” bandwagon, its first few attempts including the new Redmi Note 11T 5G have been/are far from perfect. The only real “pros” that we can think of are the good looks and great battery life but that’s not enough in this hyper competitive market.

In all the other areas, it is beaten conclusively by the Realme 8s. Then there is the Realme Narzo 30 Pro 5G, that crams even more power at around similar prices. That is, if you’re looking to get a 5G phone today.