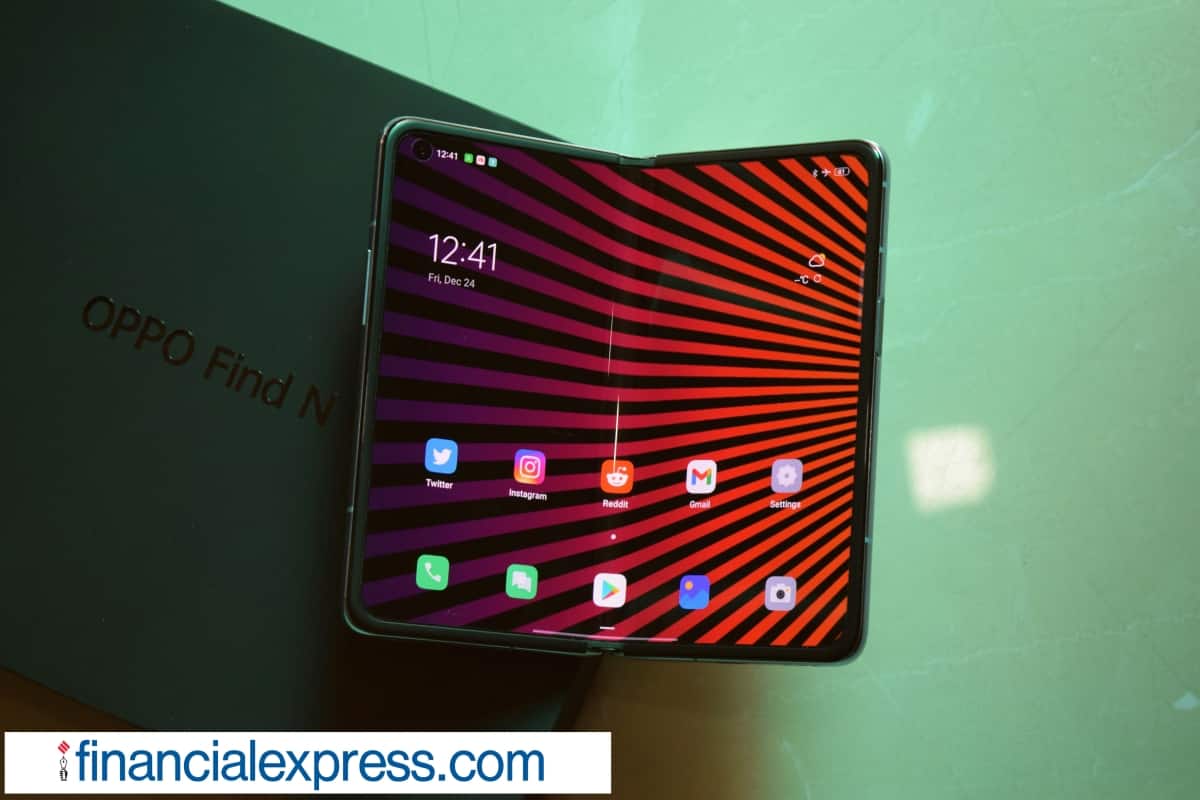 Oppo says it’s taken four years of intense R&D and six generations of prototypes to make the Find N, its first folding phone. Having spent some time with it, now, we can’t help but gush over how good it is both inside, and out. It may not be the best folding phone in the market today — that’s also in part because it’s not coming to India anytime soon — but it surely sets a new benchmark, one that every new upcoming foldable will need to best, to be worthy.

Many will remember Samsung for starting the big buzz around folding phones. Oppo will go down in history, for raising the bar. That’s how good the Find N is. In fact, it’s so good, it makes you wonder why Samsung didn’t think of something like this. It’s so good, we hope, Samsung would copy it.

Okay, enough build-up now. Let’s get into it.

Leading into the launch, Oppo promised that it had been able to solve the major pain points of current gen folding phones with the Find N. It said, it had found a way to “fix” the crease issue that mars every folding phone, including the Galaxy Z Fold 3, today. The premise was intriguing. Even too good to be true. Then it went on to announce the product, and the Find N, indeed seemed like magic.

Also Read | Samsung Galaxy Z Fold 3 review: Best of both worlds, now in the palm of your hand

But the thing about foldables is, unless you get to spend some time with them in person, you can’t be sure if they are as good as they sound. The Find N is as good as it sounds.

The secret sauce here is, obviously, the hinge. It is proprietary. Oppo calls it “Flexion.” It is made of 136 components in all stacked together in water-drop style with a precision of up to 0.01 mm. The whole setup is seemingly designed to work as seamlessly as the joints in the human body.

By widening the angle of the fold and offering a buffer, Oppo has been able to minimise the crease “significantly.” It is said to be “up to 80 percent less noticeable compared with other devices.” In person, though, you’ll hardly notice it. There are no noticeable potholes either. The whole thing appears as smooth as butter, especially when it’s fully unfolded. We would like to reiterate; it doesn’t get any better than this.

As if it wasn’t enough already, the Find N, also, does not have any gap between the two halves when the phone is folded. It is chunkier than the Galaxy Fold 3, but that’s a small price to pay for an almost no-crease and no-gap “futuristic” experience.

The inner display, meanwhile, has twelve layers including a 0.03 mm layer of ultra-thin glass. Oppo claims it can be folded “over 200,000 times while still maintaining an overall smooth folding experience with next to no crease.”

The form factor is another area where Oppo has hit it out of the ballpark. Breaking with convention, it has opted for a more compact and pocketable chassis for its foldable. The outer cover display is more akin to a regular smartphone. The inner “tablet” screen is almost a square. More specifically, the inner screen is 7.1-inch and has an aspect ratio of 8.4:9. The cover display is 5.49-inch with an 18:9 aspect ratio.

The all-round compactness ensures it’s easier to hold and manoeuvre on a day-to-day basis without any compromise on function.

Oppo is using an LTPO display on the inner screen with up to 120Hz refresh rate support. It has a 1,792 x 1,920p resolution and a touch sampling rate of up to 1,000Hz. The cover display has a resolution of 1,972 x 988p and 60Hz refresh rate. Both screens can pull 1,000nits. The body of the Find N is made of curved Corning Gorilla Glass Victus while the main camera island on the back uses ceramic.

You can prop the Find N on a surface, like the Fold 3, and use it in split screen mode at certain angles—between 50-120 degrees—giving compatible apps like camera, notes, and music more scope and function to work with. Oppo calls this “FlexForm” mode. The Find N, similarly, also supports app continuity between inner and outer screens.

Oppo has designed neat gestures like two finger swipe down in the middle to enable split-screen and four finger pinch to turn a full-screen window into a floating window to help make the most out of the inner screen. They work as advertised but the mileage may vary basis of app compatibility.

Aside from its foldable form, the Find N is also a high-end flagship. It has a Qualcomm Snapdragon 888 chip paired with up to 12GB LPDDR5 RAM and 512GB UFS3.1 storage, 4,500mAh battery with 33W fast wired and 15W wireless charging. There is 10W reverse wireless charging support as well.

For photography, it has a 50MP Sony IMX 766 main sensor, a 16MP sensor with ultra-wide lens, and another 13MP sensor behind a telephoto lens. There are two other 32MP selfie cameras on both the inner and outer displays.

Rounding off the package are dual speakers with Dolby Atmos support and side-mounted fingerprint scanner for biometrics. The only feature missing from the list is an IP rating, something that the Fold 3 has.

Oppo has launched the Find N at a starting price of CNY 7,699 (roughly Rs 92,300) in China which is aggressive next to the Fold 3, but there, it also has other folding phones from Huawei and Xiaomi to compete with. Despite burgeoning competition, the Find N might just have its work cut out. This is because while almost every competing phone is another Fold, the Find N is something else, something better. Folding phones, over the last few months—though they’ve been getting better—were becoming boring. The Find N jumpstarts the category with a hot take, that we hope, catches on and pushes more brands to think different.