Oppo Find N, company’s first folding phone leaks in full glory ahead of Dec 15 launch; here’s what it looks like

Oppo will launch the Find N on December 15 during its third annual Inno Day event in China. 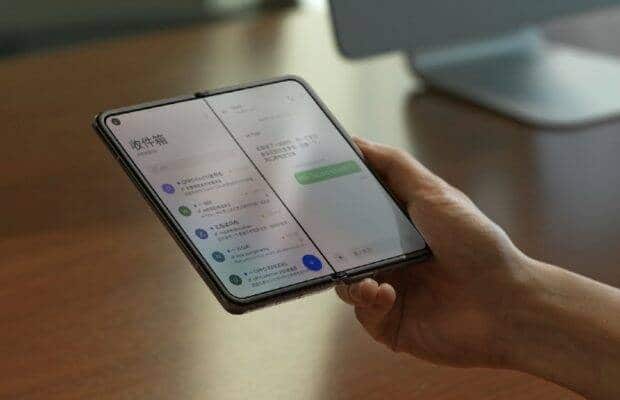 Oppo’s Find N, its first folding phone has leaked online just hours after the company confirmed it was set to launch it on December 15 at its annual Inno Day event. Serial tipster Evan Blass has managed to get hold of seemingly official looking press renders, showing off the Find N from all sides leaving virtually nothing to the imagination. Oppo chief product officer—also OnePlus founder—Pete Lau has separately shared an image of the Find N on Chinese social media website Weibo, to hype once again, its almost no crease inner display.

Let’s start with Lau’s post. The image shared by the top Oppo executive shows off the Find N in an unfolded state, which is to say, this is the first time we’re getting to see how that inner “folding” display looks like with content on-the-screen. Curiously, the two halves are joined in the middle by what appears to be a sizeable black partition though, and yes, there is no noticeable crease.

Lau has previously confirmed that the Find N will feature “perhaps the best hinge and display designs available today” and that Oppo has been able to solve the crease issue that mars every current gen folding phone, including the Galaxy Z Fold 3. The image shared by Lau corroborates this to an extent, but it is yet to be seen, how all this translates in the real world—it is after all a strategically photographed press render.

The same image goes on to confirm that the Find N will come with a hole punch cut-out at one end. Rest of the folding screen appears to look identical to what is seen in the Fold 3.

Coming to the renders shared by Blass, now, those are more substantial since we get to see the alleged Find N in full glory. By the looks of it, it looks like a cross between the Find X3 and the Fold 3. The back camera housing, which has three cameras, looks like it has been borrowed from the Find X3. Renders suggest that the primary camera will be 50MP.

The Find N appears to be lot more curvaceous than the Fold 3 as far as the renders shared by Blass go. Also, it seems the cover display will be more akin to a standard smartphone, which isn’t the case with the Fold 3. This cover display is seen having another hole punch cut-out in the renders. Oppo will offer the Find N in two colours, at least, if the renders are anything to go by.

Oppo will launch the Find N on December 15 during its third annual Inno (short for innovation) Day event in China. Stay tuned for more.