Microsoft this week dropped Nokia name on its latest Lumia 535 smartphone, having acquired Nokia business back in April. 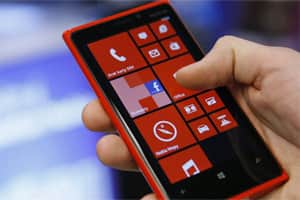 Don’t call it a comeback yet. But Nokia is thinking about how to revive its brand name in consumer markets just months after selling off its former flagship mobile phones business to Microsoft for more than $7 billion.

“I think you can expect our brand will return to the consumer world,” Nokia’s chief executive Rajeev Suri said on Friday when asked about rumours that the networks equipment maker was looking to re-enter the handset market.

Suri told investors at a presentation in London that his company will look to licensing the brand name to other firms rather than starting up a new handset business itself.

“We see brand licensing as an opportunity … But I would say it is more of a long-term opportunity,” Suri said of potential deals where other makers of consumer electronics might pay Nokia to use its brand on their products.

Another company executive on Friday pointed to Porsche Design as an example of the sort of brand-licensing deals Nokia might consider.

No deal is imminent but the Nokia brand could eventually appear on a range of electronics, not necessarily phones. “This is not a sentimentality thing,” Suri said.

Microsoft this week dropped the Nokia name on its latest Lumia 535 smartphone, having acquired the Nokia business back in April.

Nokia was once synonymous with mobile phones but the brand’s ranking sank to 98th this year among the world’s best known corporate names, down from fifth in 2007, according to a survey by market researcher Interbrand.

The slide came after first Apple Inc and then Samsung Electronics entered the smartphone market to successfully challenge the Finnish company’s decade of market leadership.