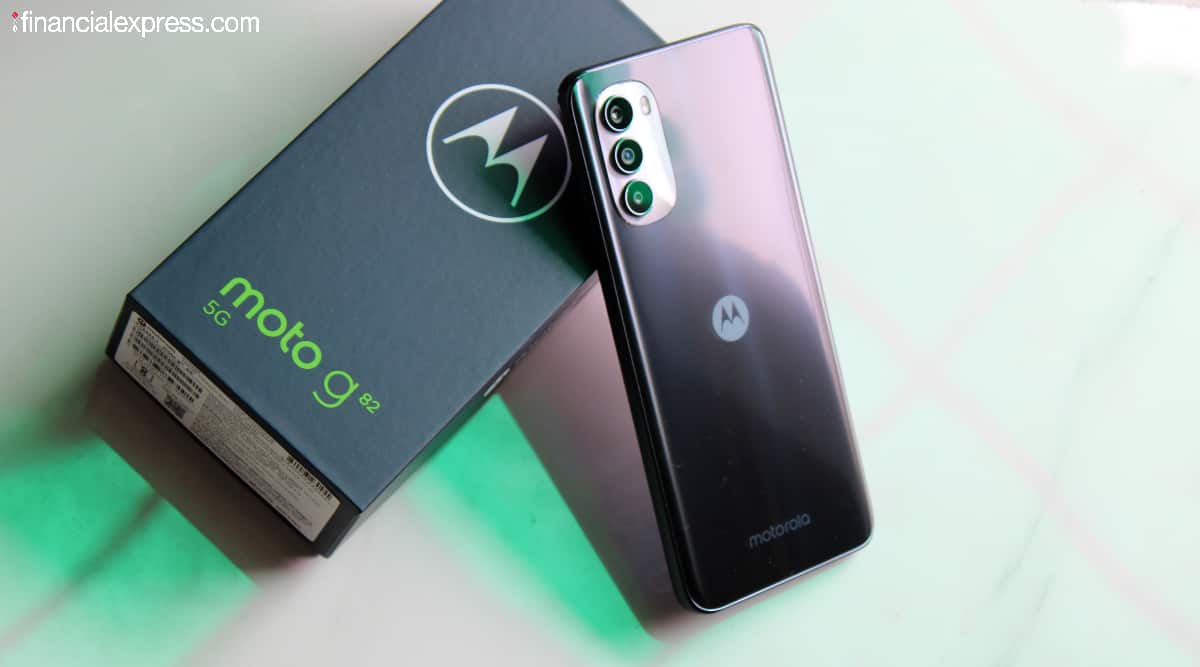 Moto G82 5G, Motorola’s new affordable midranger has officially arrived in India and going on sale today, June 14. The Moto G82 in India is slightly different from the version available in Europe. Here, the same phone has a 10-bit pOLED Display—which is a big standout feature of this phone, as per Motorola. The real USP, though, is its 50MP OIS camera. Motorola G82 price in India starts at Rs 21,499. This makes it the cheapest phone with such a camera setup in India at the time of writing. The Realme 9 Pro+, previously, held this title.

We have the Moto G82 in the house and while we work on our full review to give you a broader insight into its hits and misses, here’s a quick 10-point run-down of Motorola’s new affordable midranger— its specs, features, and everything else you need to know.

MOTOROLA G82 5G: EVERYTHING TO KNOW

1. The Moto G82 has a back made of acrylic glass or polymethyl methacrylate (PMMA). This is glossy and smooth to the touch. The phone is very sleek and light measuring only 7.9mm and weighing just 173g. You get an official IP52 water-repellent rating in this phone. The Moto G82 comes in two colourways— Meteorite Gray and White Lily.

2. The big highlight of the Moto G82 5G is its class-leading display. The phone has a 6.6-inch 1080p 10-bit pOLED display with a fast 120Hz refresh rate (360Hz touch sampling) and a tiny hole punch at the centre. There is support for DC Dimming in this phone. The screen is protected by Corning Gorilla Glass 3.

3. Despite using an OLED display, Motorola has chosen to go with a side-mounted fingerprint reader in the Moto G82.

4. Under the hood, you get a Qualcomm Snapdragon 695 chip which is paired with up to 8GB of LPDDRX4 RAM and 128GB uMCP storage. This is expandable by up to 1TB.

5. The phone runs near-stock Android 12 software with Motorola’s MY UX skin on top. It is eligible to get one major Android OS update (Android 13) and three years of security updates.

6. The Moto G82 comes with a triple camera setup on the rear with a 50MP main sensor behind an optically stabilised lens, 8MP ultra-wide-angle, and another 2MP macro sensor.

8. The phone is fuelled by a 5,000mAh battery with 33W fast charging support.

9. You also get dual speakers with Dolby Atmos playback, NFC, and support for 13 5G bands.