Prime Minister Narendra Modi has invited Apple to set up a manufacturing base in India and its CEO Tim Cook responded positively, officials said here today. 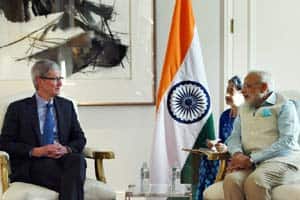 Prime Minister Narendra Modi has invited Apple to set up a manufacturing base in India and its CEO Tim Cook responded positively, officials said here today.

“The Prime Minister (in his meeting with Cook) said he would like Apple to start manufacturing in India. He mentioned the huge opportunities India offered,” Ministry of External Affairs Spokesman Vikas Swarup told reporters.

Foxconn, which is Apple’s largest manufactures, has decided to set up a manufacturing base in India, he noted.

“Cook responded positively. I think India does fits into his long term plans. He particularly was interested in the whole App development economy, which he said could be a very very important factor for entrepreneurship where individual app developers can just become part of the app universe,” he said.

“Cook said by using the app development tools people can really become part of this huge industry. He gave the example of China where in fact we created 1.5 million jobs,” he said.

Indian Ambassador to the US Arun K Singh said that during the meeting there was a sense that a lot of design innovation is happening in India.

“As Apple expands its presence in India including a manufacturing presence there could be enhanced opportunity for app development related to the apple platforms,” he said.

There was also some discussion on Apple Pay, how this can be part of Jan Dhan Yojana for instance and other such initiatives, Swarup said.

During the meeting, Cook said India has a very special place in the heart of every Apple employee for the simple reason that its co-founder Steve Jobs went to India when he was a young man for inspiration. It was what he saw in India that inspired him to launch Apple.

In a statement to PTI, Cook said Apple has been operating in India for nearly 20 years.

“We are fortunate to have many passionate customers along with a fast-growing developer community, and we’re investing to expand our operations throughout the country,” he said.

“There are now over 4,000 places in India where customers can buy Apple products, and we look forward to launching iPhone 6s and iPhone 6s Plus there very soon,” Cook said.