India will play a big part in driving technology forward in the future, Google CEO Sunder Pichai said today and praised Prime Minister Narendra Modi for accelerating India’s effort to become the next global hot bed of innovation and entrepreneurship. 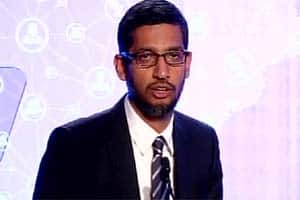 India will play a big part in driving technology forward in the future, Google CEO Sundar Pichai said today and praised Prime Minister Narendra Modi for accelerating India’s effort to become the next global hot bed of innovation and entrepreneurship.

Driving technology forward would really improve people’s lives in India and all around the world, Pichai said.

“I am not just excited because I grew up in India, I am excited because I deeply care about technology and know that India will play a big part in its future,” he said, adding that a lot of that is becoming possible because Modi is driving it forward.

“He (Modi) has accelerated India’s effort to become next global hot bed of innovation and entrepreneurship,” Pichai told a gathering of top Silicon Valley CEOs at a dinner hosted in honour of the Prime Minister, who is on a two-day visit to the city of San Jose.

More importantly, Modi understands that technology is an enabler to drive change at a massive scale, the kind of scale that India needs, he added.

The 43-year-old IIT alumnus said it is not just being on line, it is about what you get online.

“People are educating themselves, connecting with loved ones and creating and sharing videos. For example on You Tube, there are many home makers in India who make a living by posting videos on line,” he said.

Sundar Pichai who was in India last year, praised the presence of what he described as “hungry” entrepreneurs, the same kind one would like in the Silicon Valley.

“The presence of that, motivation and Indians coming online at an unprecedented scale, was very clear to me that this is a once in a life time opportunity,” he said, adding that there is evidence of this all around.

There are more than 3,000 startups in India.

“By many matrices, India is the fastest growing startups in the world. Companies like Flipkart, Hike, Zomato, Snapdeal these are all evidence of these are happening all around us. They are not just Indian success stories, they are global success stories and they create thousands of jobs,” he said.

He said that Google is proud at what is happening in India and share Prime Ministers vision for a Digital India and want to play a part in it.

Observing that two main things computing and connectivity — are foundation for a digital India, Pichai said android today is available in many Indic languages.

Pichai said Google is working on many connectivity projects, which he would announce when Modi visits Google headquarters.

“More than anywhere else, India has the innovative spirit that lies in the DNA. It is doing great things with it. It’s that spirit that drives everyone here,” Pichai said.