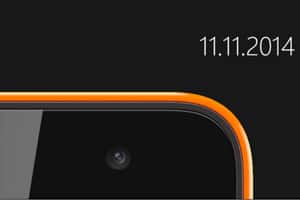 In a teaser on its Conversations blog, Microsoft today said: “Microsoft is delivering the power of everyday mobile technology to everyone. Come back on November 11, to find out more!”

It includes teaser shots on the look of the device without disclosing the features.

Last month, Microsoft had confirmed that it plans to do away with the Nokia brand on Windows Phone-based devices.

“We are looking forward to unveiling a Microsoft Lumia device soon. This is of course a natural progression as all devices that once came from Nokia now come from Microsoft,” Microsoft Senior Vice President of Marketing for Phones Tuula Rytila had said.