The Micromax YU Yuphoria is aimed at the lower entry level segment with a price tag of Rs 6,999. 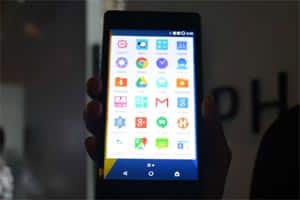 Micromax Yu Yuphoria is powered by Cyanogen OS 12 and the firm said that it had tried to adopt several design aspects from the sports watches and the automobile sector. (Photo: Shruti Dhapola)

After staying at the top in the books of reviewers, tech enthusiasts and bloggers, YU is back again. The Indian handset maker Micromax YU, on Tuesday released its next device named the Yuphoria.

YU took the advanced entry level market by storm after its December 2014 release of Yureka. The Micromax YU Yuphoria is aimed at the lower entry level segment and will be a solid challenger for Lenovo’s recent acquisition Motorola, Samsung and other rivals who are trying to capture a bigger share of the segment. Also, the handset maker claimed that it was trying to break the flagship device myth that comes with a higher price proposition

Commenting on the launch, Rahul Sharma, founder YU, said, “We stepped out to do everything that’s exciting and new and today’s launch is all of that. We are proud to say that with Yuphoria, we are breaking the flagship myth and introducing our first smartphone that has been designed and assembled in India.”

Yuphoria is powered by Cyanogen OS 12 and the firm said that it had tried to adopt several design aspects from the sports watches and the automobile sector. The new device comes with Qualcomm Snapdragon 410 on a 64-bit architecture roaring under the hood combined with an Adreno 306 for graphics display. The company claimed that the Adreno GPU will allow a seamless and immersive experience for 3D games. The device is 4G enabled and takes the advantage of a 1.2GHz quad core processor loaded with a 2GB RAM. Internal storage on the device is 16GB. The Yuphoria sports a 5.0-inch Gorilla Glass 1280×720 HD screen at 294ppi. The is an 8MP snapper with a f/2.2 aperture and center -aligned LED flash.

The Yuphoria packs a listening experience with Wolfson Sound Technology which promises higher quality sound output. The device also has an integrated Truecaller’s caller identification and the new Cyanogen email client.
The device, which comes decked with an accelerometer, ambient light sensor, Proximity sensor, 6-axis Gyroscope and an electronic compass, will be available in two surreal colors- Buffed Steel with Black cover and Champaign Gold with White exclusively on Amazon.in.

“Our partnership with YU continues to drive user-focused experiences to the forefront and reveal the limitless possibilities of connected devices with powerful software experiences,” said Kirt McMaster, CEO of Cyanogen Inc. “What YU is doing in the market is disruptive and leading edge, and together, we are creating the next generation of mobile experiences.” The device maker announced that registrations for the device would open on Tuesday evening while the first sale will start from 28th May this year at a price of Rs 6,999 a unit.