Lenovo Yoga 2: Tablet with a kickstand

Lenovo ups the game in the tablet segment with Yoga 2. 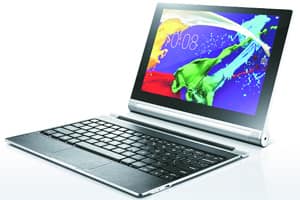 Afraid that your pricey little tablet is going to break or is too big to handle for all tasks? Well, your prayers were heard by Lenovo and as an answer they brought out the Yoga 2. With a sleek kickstand, that changes the ball game in the segment altogether, Yoga 2 offers four modes of operation—Hold, Stand, Tilt or Hang. The four mode option aids the Yoga 2 to adapt to any need of the user.

Design: Yoga 2 has a cylindrical design with a sleek finish that makes it unique and is a departure from other tablet designs. The company has been promoting the Yoga tablet’s cylindrical design as being more user-friendly when compared to other conventional tablets. The cylindrical shape at the bottom gives the tablet a good grip and helps the user to use it more easily that other tablets.
However, the tablet does feel a tad heavy at the bottom when used for a long time. Coming to build, the Yoga 2 uses aluminium and plastic at different places. The battery is larger and forms the part of the cylinder. There is a metallic power button at the side of the cylindrical base and a 3.5mm sound jack at the other end. The volume control panel is just above the power button on the side of the tablet. The SIM slot and the MicroSD slot is at the back panel safely covered by the kickstand.

Display, sound: When it comes to display, the Yoga 2 stands out proudly from its family line. Sporting a resolution of 1920 x 1200 with a pixel density of 283 ppi combined with a Full HD display, it provides brighter pictures and richer colour display. There was a lot of complains with the new A8 about its display but the Yoga 2 puts them all to rest. Sound is another feature which Lenovo has put emphasis on. Like all the recent Lenovo tablets, this one too comes with Dolby surround sound. Users can enjoy movies, music and also customise their own Dolby effect
using an app that comes pre-installed.
Addition to the Dolby is the Wolfson Master Hi-Fi noise reduction tech that enhances the sound quality and output. Unlike the previous tablets, the Yoga 2 has front facing dual speakers that are a tad louder than the older ones and also help in getting the surround effect.

Camera: Tablets are not expected to have powerful cameras and neither are these cameras expected to take good pictures but the cameras of Yoga 2 show that Lenovo is trying to reach perfection in this category. The 8-megapixel back camera and the 1.3 megapixel front camera clicks decent pictures in good light. Selfies are not that perfect compared to other smartphones but are better when compared to other tablets.
Hardware, performance and storage: The Yoga 2 is faster than most tablets. With an Intel quad-core Atom processor that dials at 1.86GHz and Intel HD Graphics, the tablet will satiate your hunger for play and work. The 2GB (64 bit) RAM also infuses some nitrous into the performance. However, there are other faster options available in the market. Be it the latest Asphalt or heavy games from Nautilus, the Yoga 2 simply offers an unparalled experience. With a frame per second speed of nearly 60, the tablet is as good as any high-end graphics module available in the market.  The Yoga 2 has no space deficiency. It comes with a 16GB inbuilt memory and another 64GB can be added via the MicroSD option. The Yoga 2 is a causal gamer’s dream.

Operating system and menus: The tablet comes with the standard Android 4.4.2 in the box upgradeable to 4.4.4. But it is in the menus that Yoga 2 seems to have goofed-up just a little. There are no clear menus or app buttons. Instead of the menus being at the top, all the menus are at the bottom which is unconventional and will need a little getting used to.
Battery, connectivity and other components: This is Yoga 2’s strong suite. With a 6400 mAH battery, it gives at least a battery backup of 18 hours without Wi-Fi usage. Also, the tab comes with 4G lite connectivity along with regular data connection, Wi-Fi and Bluetooth. In the box—The tab comes with an adapter and a microUSB but has no earphones or headphones.