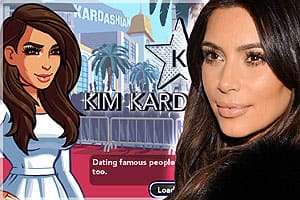 Reality TV star Kim Kardashian’s avatar on her popular game application ‘Kim Kardashian Hollywood’ has been deemed as the second most influential fictional character by a magazine.

Character of Queen Elsa from Disney’s 2014 hit film ‘Frozen’ has topped the list of 15 by Time magazine, reported E! online.

The Kardashian game, available for Apple Inc’s iPhone, and Google’s Android and desktop computers, was released this past summer and has made an estimated USD 200 million, according to Time. It ranks as Number 11 on the Apple App Store’s list of Top Grossing apps.

Thank u Time Mag 4 recognizing my character in the Kim Kardashian Hollywood game as the #2 most influential character pic.twitter.com/vfK4nnatnz

The user’s goal in the game is to become as famous as possible, with Kardashian’s guidance, by taking part in photo shoots, walking runways, meeting with VIPs, acting in movies and TV shows, buying stylish clothes and lavish homes all over the world, going on dates, advancing romances and even getting married.

Others who made the cut on the list include Hello Kitty, ‘Game of Thrones’ most reviled King Joffrey, Jennifer Lawrence’s ‘The Hunger Games’ character Katniss Everdeen and Chris Pratt’s ‘Guardians of the Galaxy’ character Star-Lord. Stephen Colbert’s alter ego on his satirical Comedy Central show ‘The Colbert Report’ is also on the list. [polldaddy poll=8523215]