Indian innovation will pick up as there is market for it now: Google CEO Sundar Pichai 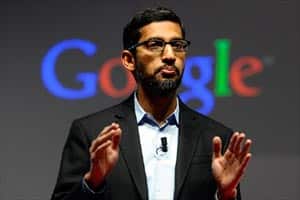 Welcoming Prime Minister Narendra Modi to the Silicon Valley, the India-born CEO said there is tremendous excitement for his visit among all Googlers and the entire Indian community.

India could reward risk-taking a bit more and, perhaps, its education system could emphasize more creativity, Google CEO Sundar Pichai told a group of Indian editors, but once there is a big enough market – and that is what the internet is providing – there is no reason why Indian innovation won’t take off.

On his first visit to India after taking over as Google CEO, Pichai was reluctant to set timelines for this transformation or give numbers on when the India operations could become more important than the US one, but he did say that Google already had 1,500 people in India as compared to around 10,000 in the Bay area – India, he said, will be a bigger market for Android phones than the US sometime in 2016 and it has already has more internet users. “And that’s when there’s still a billion more people to connect to the internet”.

Google’s vice president in charge of product management Caesar Sengupta spoke of how Flipkart’s mobile app – built upon the Chrome platform – is truly world class in terms of what has been done to get greater speed. Sengupta said that while designing a full phone like the Android in India could take time, firms like Lava that Google was working with were already doing great work – as part of Pichai’s India visit, Google announced a programme to train two million Android developers over the next three years by working closely with over 30 universities.

Earlier, Pichai said, when you developed products for India, you did that in the US and imported them … now, we develop them here and take them to the rest of the world where they do well. By way of an example, he spoke of taking YouTube offline, where a lot of the work was done in India.

Giving other examples, Pichai spoke of the innovation done by Aadhar and the National Payments Corporation of India Limited (NPCIL) in getting biometrics and then building a payments solution around it. “We’re all working on payments and, when it happens, it will be as revolutionary as the maps for instance”. Sure, he said, it would be nice to have better infrastructure and ease of doing business in India, but constraints add to creativity.

Pichai refused to get drawn into the debate on intolerance in India, and said his comments on the need for racial tolerance were really a response to the debate in the US.

The Google CEO said he had a 3-pronged 3-year strategy for India. Providing internet connectivity at 400 railway stations was the first, better connectivity through the Loon was the second and the third was to create platforms to make it easier for its users to build on top of Google’s Android and Chrome to address local problems.

Google has piloted a project with Tata Trust in 1,000 villages across three states, wherein women in bicycles travel around to help other women and train them on using internet on smartphones. This project will be expanded to 3,00,000 villages, or almost half of the 6,00,000 villages in the country, Pichai said.

To aid millions of non-English speaking Indians, the company has created a virtual keyboard that includes 11 Indian languages to help non-English speaking Indians to access the internet, Pichai said. The company has also launched a tap-to-translate app on its Android phones that helps translate English language texts on apps to other Indian languages and vice-versa.

Another virtual-visual app, than can translate any signboards in English into local language is also expected to launch early next year, Caesar Sengupta said.

Google has created a lighter version of its search web pages called Search Streamline, wherein users on 2G networks would see the web searches load 30% faster, using 5 times less data, and 3G users could access web pages which will loan 4 times faster with 80% less data consumption, Tamar Yehoshua, vice president of product management at Google, said. The product has been rolled out in India first, and then taken to Indonesia and Brazil. Google plans to expand this feature to other countries as well.

Google is expanding its offline feature MapMaker, which was launched by Indian engineers first to other countries. Also the low-cost Android One smartphone was first introduced in India, before the company launched in 20 other countries.

The company is also aiming to get more small and medium business on its map feature, Google for Business. Until now it has about two million businesses listed on its maps, and Google aims to have atleast 20 million of such businesses by 2017, Jen Fitzpatrick, vice president for Maps at Google said.