India to be bigger market than US for Google in 2016: Sundar Pichai

Projecting India as a larger market than the US for Google by 2016, the internet giant’s Indian-origin CEO Sundar Pichai today said doing business has improved here but should “get a whole lot better”. 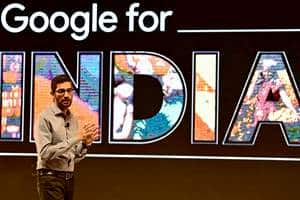 Projecting India as a larger market than the US for Google by 2016, the internet giant’s Indian-origin CEO Sundar Pichai today said doing business has improved here but should “get a whole lot better”.

On his first visit to India after taking over as CEO of US-based Google in August, Pichai said the constraints inspire creativity and innovative solutions and there should be freedom of information and debating.

“It has got much better. I think it should get whole lot better,” he said at a media conference here in reply to a question on ease of doing business in India.

“I am amazed when I speak to people working on payments here… Constraints inspire creativity and when you have constraints, you have to figure out innovative solutions to overcome that. I think that translates into innovation,” he said.

Pichai said freedom of information is very important and internet is designed to do so.

“I gave the example earlier that if people in India create Youtube videos and they get 60 per cent of their views outside. I think these are examples that information wants to flow freely,” he said.

Citing example of debate around impact on bicyles when Wright Brothers invented the first plane, he said, “I think benefits of the free flow of information in a strong way, in my opinion, outweighs the cons associated with it…I hope we will have healthy debate. I hope it’s a civilised debate.”

Pichai, who is meeting top leaders including President Pranab Mukherjee and Prime Minister Narendra Modi during his two-day visit, also said that India will be a larger market for Google than the US next year.

“…the fact that something is going to grow at a bigger scale than the US and yet there is such a big opportunity, I think we are naturally at a point where India is a much much bigger focus for us,” he said.

He further said, “We think that what we build in India will apply to many global places.”

On his engagements here, Pichai said he wants to explain that Google is in India with a set of initiatives.

“We want to ask them what they want us doing for India. It’s a dialogue, it’s not short term.”

India, he said, has historically been one of Google’s best markets. “We have been able to do things that we wanted to do.”

India, he said, is a diverse society and therefore “I put universal values here.”

He said every time there are changes in technology people worry about them and debate them.

“I think technology working as global platform is new. With that comes great things and with that comes constraints as well. I think society needs to debate in a healthy way.”