Huawei Honor 6: A little mix of everything

The Honor 6 is one of the best value-for-money smartphones you will find in the market today. 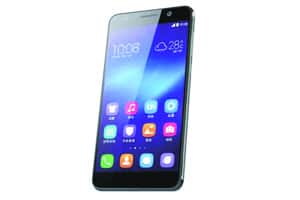 When a premium phone sells 10,000 units on an e-commerce website in just 48 hours of it being launched, and when it generates sales faster than any of its predecessors in India, it is either special, overrated or simply economical. But then the Huawei Honor 6, before its Indian debut, had sold over 2.5 million units in just three months in China! So its success in India was largely expected. But is the Honor 6 that unique a phone?

First, the looks. From the front it does look like the older iPhone models (minus the iPhone’s Home button). But have a closer look and you will realise Huawei has paid a lot of attention to minor detailing. The peacock inspired back cover—with a 3D rhomboidal diamond-style texture—looks fresh, and rounded corners ensure that the phone fits comfortably in the palm of your hand. While the Honor 6 is thin, but Huawei says that special purpose composite materials, forged with six-layer high-tech complex technology, ensure that it is not frail. (So it won’t bend in your pocket!). Overall, its build quality is satisfactory and the Honor 6 feels solid in hands.

The Honor 6 is powered with the 1.7 GHz Octa-Core processor, and the addition of 3 GB RAM enhances the processing speed and 16 GB ROM gives sufficient files storage capacity. The phone also gets a micro-SD card holding up to 64 GB. All this ensures that the phone doesn’t heat up even under the most demanding usage, and we didn’t encounter any lags whatsoever even while using multiple apps. Further, the addition of the Android 4.4.2 KitKat operating system enhances the user experience.

A 13-megapixel rear camera with a dual LED flashlight throws up really nice images; however, photography under low-light conditions still leaves much to be desired. No, the photos aren’t bad per se, it’s just that some smartphones with a similar-specification camera do produce better images even in low-light conditions. Mention must be made of the all focus mode —shoot before focusing and afterwards simply touch the screen to adjust. The front 5-megapixel camera is surprisingly good—use it for selfies or video calling, and the results are commendable.

One of the best things about the Honor 6 is its battery life. In fact, Huawei claims a minimum battery life of 2.7 days for regular use and 1.2 days for heavy use. At 3100 mAh, the battery is better rated than that of either the Samsung Galaxy S5 or the HTC One M8. The Honor 6 easily lasts up to two days in normal usage conditions, and even if you use 3G extensively, the battery will last more than a day.

So, is the Huawei Honor 6 special, overrated or simply economical? We have reasons to believe that it is a right mix of design, performance and battery life, but the best thing about the Honor 6 is its price. Currently retailing for R19,999 on Flipkart, the Honor 6 is one of the best value-for-money smartphones you will find in the Indian market today, especially considering the fact that its specifications match those of the Samsung Galaxy S5, HTC One M8 and the Sony Xperia Z2—all of which cost upwards of R30,000.