A strong mobile devices market and interest in technology present a good opportunity to build products in India and then taking them global, Google CEO Sundar Pichai said today. 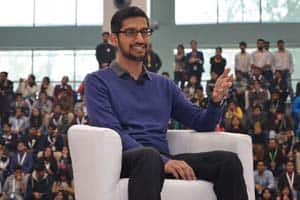 A strong mobile devices market and interest in technology present a good opportunity to build products in India and then taking them global, Google CEO Sundar Pichai said today.

The India-born executive, who took over as head of one of the world’s largest tech companies in August, also emphasised on the need to encourage creativity and experiential learning as part of the Indian education system.

“We are working very hard to bring everything (all its products to India). We also see an opportunity to do things first in India and that will work for global markets too,” Pichai said at an event here.

Citing the example of ‘YouTube Offline’, he said the service was first launched in India and then taken to 77 countries.

“So we see that as a good template… we are investing a lot in India. We are expanding our engineering offices in India significantly. I am excited about what we can do here and take it globally to rest of the world,” he said.

Talking about the education in India, the Chennai-born CEO said the system should “encourage creativity and experiential learning”.

He said the focus in India was more on rigorous academic knowledge, while education in the US was more experiential.

“That’s a big difference. I think it should allow a system of creativity, project-based, experiential learning. We should teach students to take risks and not penalise them,” he told the audience at a Delhi University college here.

When asked what he would have been if not Google CEO, Pichai said he would still build software.

Talking about Google 30 years from now, he said he hopes that the company is still working on products that solve problems for the whole of humanity and added that it was for this principle of helping humanity using technology that drew him to Google.

On startups, Pichai said he had been waiting for this change in the country for many years.

“I finally felt it when I visited India last year. The quality of ideas by Indian startup founders is the same as that of entrepreneurs in Silicon Valley,” he said.

Pichai added that startups should not be ashamed of failures and should rather learn from them.

“In the Silicon Valley, it (failure) is considered a badge of honour due to the lessons the founders learnt from the journey,” he said.