Android does not have enough 10-inch tablets that could be called a value-for-money proposition. 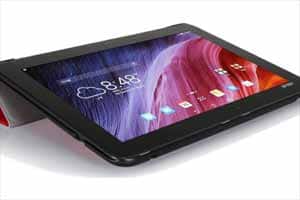 If you are in the market for a 10-inch tablet, you’ll be surprised by how limited your choices are. In India, Android does not have enough 10-inch tablets that could be called a value-for-money proposition. The problem, in most cases, is price.

For any other screen size, be it 7 inches, 8 inches or 9 inches, there is a wide variety of tablets by different manufacturers. And while not every one of those will be a winner, you always have a few decent options. For example, you can buy the Digiflip XT811 for Rs. 10,000, which is a good enough proposition for most regular users when compared to an iPad Mini, which costs about Rs. 17,000. But for 10-inchers, there’s no such luck in the budget segment.

The new Asus Transformer Pad TF103 is the cheapest you should go, and that costs Rs. 20,000. Sure, there are a few others that cost less, like the iBall Slide series, but there are far too many problems in those for us to recommend.

The iPad Air is a better tablet than its Android competitors, so in most cases, you are better off raising your budget and buying an iPad instead of any of the 10-inch Android tablets.

The problem really isn’t the iPad Air; it’s still a pretty expensive tablet for a large number of Indians to buy. The problem is that Google’s Android partners aren’t making affordable 10-inch tablets. The loser, in the end, is the consumer.