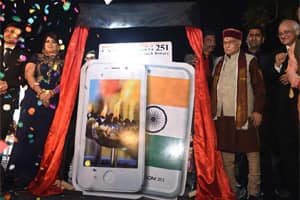 ‘Freedom 251’ mobile row: In a major relief to the makers of ‘Freedom 251’ mobile that was priced at Rs 251, the Allahabad High Court on Friday said the FIR filed against the Ringing Bells Pvt. Ltd. – the Noida-based firm that created a global buzz after announcing the launch of the controversial smartphone in February – seemed premature.

A division bench comprising Justices B.K. Narayan and R.N. Mishra ordered that no coercive step be taken against the company’s officials and their business till the next hearing on May 18.

During the course of hearing, the bench kept on asking the prosecution lawyers as to how an offence under Section 420 of the Indian Penal Code (IPC) was made out against the makers of ‘Freedom 251’ smartphone but no cogent reply was offered. The court then ordered them to file a reply within two weeks.

Also Read
Samsung Galaxy M53 5G: Good specs, but is that enough?
No need to disable ‘Read receipt’: Here is how to read WhatsApp messages without blue tick notifications
How to send WhatsApp messages from website without saving a number
HP LaserJet Tank MFP 1005: Print quality that is hard to beat

A first information report (FIR) was registered in March against Ringing Bells director Mohit Goel and company president Ashok Chaddha under Section 420 of the IPC as well as the Information Technology (IT) Act on a complaint filed by Bharatiya Janata Party (BJP) leader Kirit Somaiya.

The court also allowed the petitioners the liberty to move an application for the release of their passports.

“We are very happy with today’s (Friday’s) order. We shall now press for the quashing of the FIR as there is no merit in it and extraneous factors have gone into its lodging. This FIR is a strategy to derail the timely launch of the flagship product of the company,” said Abhishek Vikram, counsel for Ringing Bells.

It distributed some “prototypes” of the product to the media which turned out to be Adcom handsets. However, the company maintained that the device has been developed “with immense support” from the government.

According to the company, the smartphone will run on Android 5.1 operating system and sport a 4-inch qHD IPS display, a 3.2-megapixel primary and a 0.3-megapixel front camera.

However, doubts were raised after assessments of the handset’s viability concluded that such a device cannot be offered for less than Rs.2,300-2,400.

The company said it planned to give 25 lakh handsets in the first phase before June 30.

Ringing Bells had received 30,000 orders on the very first day. The remaining customers for the first 25 lakh handsets were to be selected on first-come-first-served basis as the company received about seven crore registrations before the payment gateway crashed.

Later, the company decided to return the money to the customers who pre-booked the Rs.251 device on the first day of the sale.