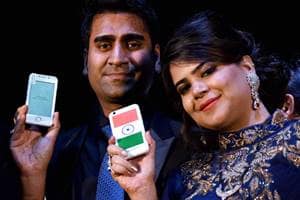 Ringing Bells ‘Freedom 251’ mobile row: With the launch of the ‘Freedom 251’ mobile phone priced at Rs 251 turning into a controversy after its website freedom251.com crashed on first and second days days causing inconvenience to eager buyers, BJP MP Kirit Somaiya on Friday levelled serious allegations against the company, saying it is a ‘ponzi bogus company scam’.

“This is a huge scam, that is why I went through all the papers of the company. The government has informed Uttar Pradesh government to check the bonafide of the promoter. This is a Ponzi bogus company scam,” Somaiya told ANI.

The BJP MP has approached telecom ministry, telecom regulator TRAI, consumer ministry, Sebi, corporate ministry, finance ministry, RBI and state governments to check various concerns that he has on company offering mobile phone for Rs 251– which is proving to be the world’s cheapest smartphone.

Noida-based company Ringing Bells on Thursday started booking for the phone for Rs 251 and has said that delivery of all handsets will be completed by June 30.

The 3G handset, Freedom 251, features a 4-inch display, Qualcomm 1.3-GHz quad-core processor and 1 GB RAM, according to details shared by the company.

The BJP MP had earlier written a letter to IT Miniser Ravi Shankar Prasad questioning the abnormalities in the company.

Somaiya in his letter asked whether the objective and aim behind the offer had been studied. Has it been investigated if it is a collective investment scheme or a ponzi scheme, he enquired.

He also questioned the background, the financial status, the owners of Ringing Bells Pvt Ltd, saying that he was “far from convinced” with the response given by Ashok Chadha, President of Ringing Bells. Chadha, in the defence of his company and product, had said that cost was brought down due to local assembling and online marketing.