Fake BHIM apps on Google Play Store: What you need to do

Prime Minister Narendra Modi had announced the launch of BHIM mobile app in order to enable citizens to make digital payments and transactions. While the app is at the top of Google charts with more than 3 million downloads, the same platform which is filled with numerous duplicate apps. 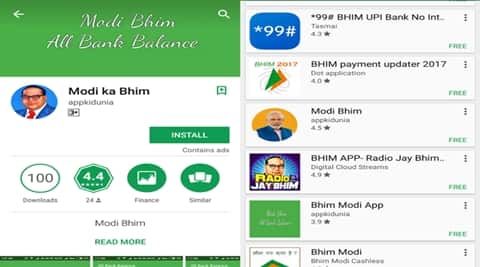 The fact that a PayTM allows you to load your wallet using BHIM—through a bit of a circuitous route right now—is testimony to its growing appeal.

Prime Minister Narendra Modi had announced the launch of BHIM mobile app in order to enable citizens to make digital payments and transactions. While the app is at the top of Google charts with more than 3 million downloads, the same platform which is filled with numerous duplicate apps. Some of the names with which the fake apps are listed on Google Play Store are: BHIM UPI Bank No internet, BHIM payment updater 2017, Modi Bhim, BHIM App-Radio Jay Bhim, Bhim Modi App, Bhim Modi, BHIM Payment-UPI Guide, BHIM Banking guide, BHIM banking, Modi ka Bhim and many more. Some of these apps also act as a guide to using the original BHIM app but all they do is redirect it to the actual app. There is one app which claims to even verify your new Rs 2,000 currency note.

You need not worry but just keep a few things in mind before downloading and using the app. The payments app based on Aadhaar has been developed by the National Payment Corporation of India (NPCI). Even their Twitter handle warns users from downloading duplicate apps. You should not go to a third party play store, but only on Google’s own Play Store when downloading the app. The app should have NPCL’s name in the developer’s category. Stay away from apps which have website domains in the title. You can download the app from this link: https://play.google.com/store/apps/details?id=in.org.npci.upiapp

Some of the fake apps have crossed hundreds of thousands of downloads from the Play Store, which means a lot of people are getting duped and they are not able to reap the benefits of the original app. One of the apps called 99# BHIM UPI Bank No internet has able to manage 1 lakh downloads and claims to offer USSD and UPI payments services, but it only has a list of banks which offer that. There is, however, a disclaimer in the description, but it can easily be missed by someone downloading it.

Most of the apps only consist of lists, but there are some of them which ask you for access to your pictures and data, which can be dangerous. The funny thing is that all the fake apps have decent ratings on the Play Store, and we fail to see why. BHIM app is the Indian government’s latest app to push India towards a cashless or ‘less-cash’ society. After downloading the BHIM app from the Play store, the user has to register his/her bank account and set up a UPI Pin for it. So, beware before downloading fake apps, and in case you want a guide to using the app, we have a link here.