Canon Powershot SX60HS review: A bit expensive but worth every penny

Canon SX60HS packs a gigantic 65X optical zoom and gives you almost as much controls as a top end DSLR, maybe more. 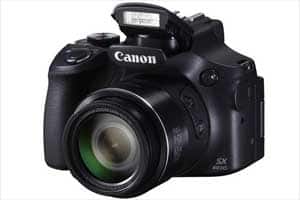 The Canon Powershot SX60HS gave a near perfect moon shoot. If only I had steadier hands.

Among the few things that separates standalone cameras from smartphones these days is the zoom. It is near impossible for a phone to add optical zoom beyond a point, though companies like Samsung which launched the Galaxy Zoom would beg to differ. Still a 30X zoom is impractical on a compact smartphone. So is a large sensor, for which you need a bigger chassis like in standalone cameras.

The Canon SX60HS takes this advantage to a different level by packing a gigantic 65X optical zoom. Combine that with the digital blow up and you get a total of 135X zoom. Now that is better than most mid-range telescopes. For those who understand lenses the 35mm equivalent would be a 21-1365mm lens. That is about five times the popular DSLR zoom lens range of 75-300mm. That is really taking things to a whole new level.

Design: The SX60HS is a compact bridge camera size and fits comfortably in your hand. It offers a good grip with most of the controls easily accessible using the right hand. It has a tiltable 3-inch LCD and a digital image finder. Near the trigger is a jog dial that lets you change the settings easily. There is also a mode dial that lets you choose from a variety of modes from full auto to custom. More controls come below, to the right of the LCD panel.

Performance: I have used ultra-zoom cameras before. They all face one big issue, that of being able to offer a stable shot at extreme zoom. A small shake of the hand when you are at full zoom will take you off focus by many degrees. That is why image stabilisation is crucial on a camera that is looking beyond the others. This is also the biggest plus point of the SX60HS. You just need to take a look at the moon shot to gauge how good the image stabilisation is.Of course, it is difficult to get the moon in the frame at the zoom takes you all over the place, but once it clicks, the results are near perfect and noiseless. For best results you might need to invest in a tripod. That will make life much easier.The Canon Powershot SX60HS zooms in on a beehive that is over 30 metres away.

But then this is not a one-trick cameras. It has a wider lens that most cameras that boast of high zoom. So you can click some great close up as well as macro shots.

The there is the burst mode that lets you shoot up to six shots per second, good enough to catch a bird in flight.

The zoom also works with the FullHD video recording and that has its advantages for people who like to shoot wildlife or just monitor stars. You can click stills along with video, but then the camera takes its time to record the shot.

The camera gives you almost as much controls as a top end DSLR, maybe more. You have all the modes you would find in a high-end camera along with the ease of switching back to the comfort of multiple auto modes and presets. This camera is a good option for those getting serious about video for it comes with a built in stereo microphone as well as the option to plug in an external mic for better audio quality.

Extras: Another area that Canon has been working on is the Wi-Fi connectivity. WIth the SX60HS, it takes it to another level by adding NFC too. NFC is easy as tapping you enabled smartphone to the camera opens up the Canon CameraWindow app that lets you access images or shoot remotely. I did not find the Wi-Fi option that easy. Canon should think at making this much more simpler, in fact as simple as selecting the camera on the phone or vice-versa. Entering a password or SSID using the camera is a tiresome process. Still, the ability to connect to a smartdevice seamlessly adds a lot of value to the camera, especially for those who need to send images on the fly.

Verdict: The SX60HS is a worthy upgrade from the SX50HS which it is replacing. Though a bit expensive at Rs 35,995, the phones features makes it worth every penny. I suggest this camera for those who have an eye on nature and will use the zoom a lot, as well as those looking for a good video camera.