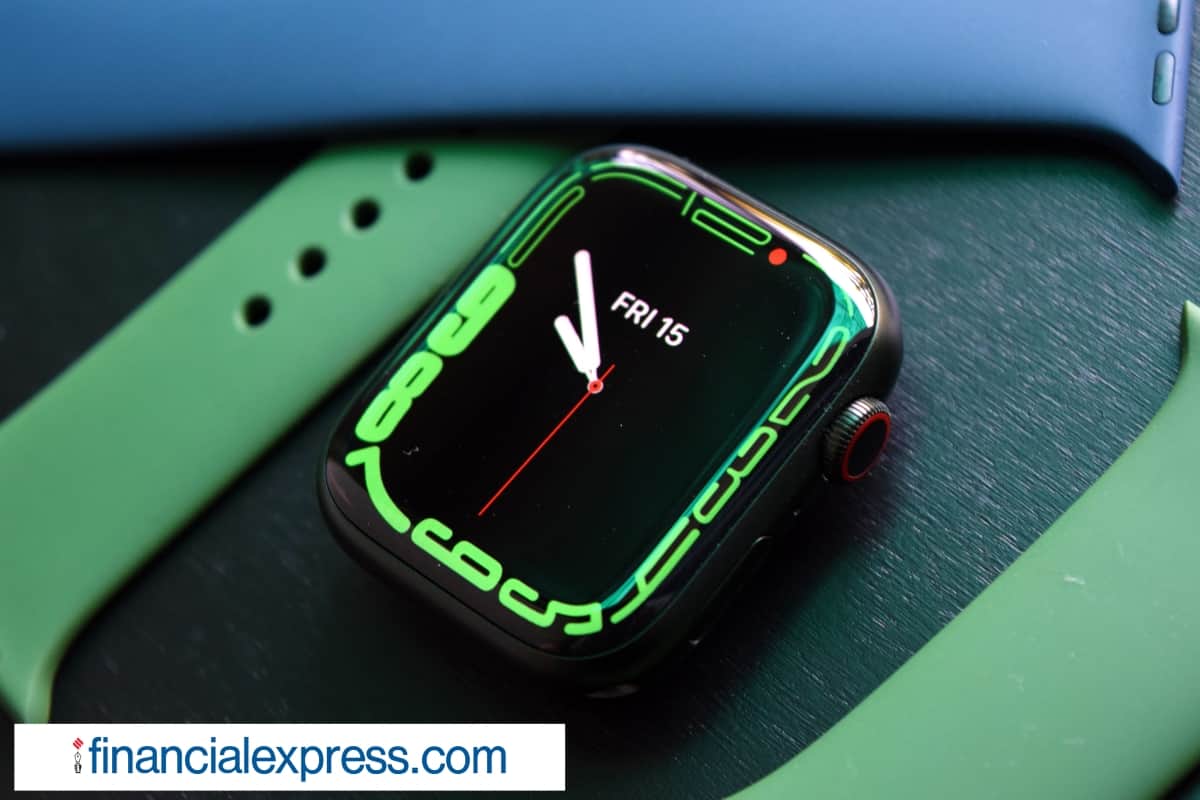 The Apple Watch Series 7 is bigger, ever so slightly than the older Series 6. It’s a little stronger. Faster, too. All this makes the Series 7 a better smartwatch than its predecessor, obviously, but it is also one of the most boring updates the world’s best smartwatch has seen in years.

Maybe it’s got something to do with expectations. Well into the launch, there were rumours of a design overhaul like no other. Because the Apple Watch has looked the same since a while now, a visual upgrade like the one the leaks had made up, was much awaited. But it was Apple that got the better of leakers, in the end.

Also Read | iPhone buying guide 2021: How to pick the best iPhone per your budget today

What we got, instead, was a throwback from 2018. This was the first time the Apple Watch had got bigger—and better. But while the Series 4 was revolutionary, the Series 7 keeps the ball rolling, simply. A lot like the Series 6 and Series 5 did before it.

The Series 4 was a must-have. The Series 7 is nice to have around.

In other words, you’ll do just fine if you plan to hold on to your current Apple Watch. Or you can buy any of the last gen models (except the Series 3 that Apple continues to make for some curious reason) and save some money, too, without having to deal with any significant compromise in hardware, even software.

That is not to say that the Series 7 isn’t worth your time. It is, for all intents and purposes, the best smartwatch that Apple makes today. If anything, it’s a testament to the kind of lead Apple commands over rivals in the category. The story remains the same, time and time again.

The biggest upgrade that Apple is giving you, with the Series 7, is a slight increase in screen size. The new watch comes in 41mm and 45mm sizes. This was 40mm and 44m in the last generation. That doesn’t mean the watch itself has got bigger though. It still occupies the same footprint as the Series 6 more or less, but the bezels are now much narrower, resulting in a more immersive experience than before.

Apple has also designed two custom watch faces that benefit from all the extra real estate. One of them, called contour, features text that spills on to the sides of the watch. The other, called modular duo, lets you stack more detailed complications together. Both seem exclusive to this generation of the Apple Watch at the time of writing but, we don’t see why they can’t be ported to older models, down the line.

There is another benefit of having a bigger Apple Watch like this. It’s (also) given Apple more legroom to include a QWERTY keyboard, for the first time. Its use case may be completely subjective (since not everyone may fancy typing on a smartwatch, regardless of its size) but it’s a nice addition, nonetheless. Also, it helps Apple tick a box.

Then there are the usability benefits. The Series 7 can simply fit more stuff, so you’ll end up scrolling less. Then again, is the shift as dramatic as the Series 4? We don’t think so.

Moving on, Apple has cranked up the brightness in this generation with the always-on Retina display being up to 70 percent brighter indoors than the Series 6. Not that the Series 6 wasn’t bright already, but we don’t think anybody would mind having to wake their watch far less frequently as they would earlier. To be clear, outdoor peak brightness stays same as the Series 6.

Last but not the least, durability has also got a slight—but important—upgrade. The Series 7 is more crack-resistant than its predecessor. It is now rated IP6X for dust-resistance, too, in addition to being swim-proof with a water resistance rating of WR50.

Underneath all this is a very familiar smartwatch with an industrial design that—may be polarising for some—has single-handedly changed the way we all perceive wearable technology today. It’s helped make smartwatches feel more at home, almost like second nature to you, and less of a chore, a computer strapped to your wrist if you will. Everything from the fit and finish down to the button placement and haptics in the digital crown, to how all of this comes together in software (watchOS 8 in this case), screams meticulous craftsmanship.

You can get the Series 7 in a few more additional hues, green and starlight aluminium for instance in addition to stainless steel (these will be shinier and slightly heavier). There are, also, a lot of bands both first-party and third-party to choose from which is to say, you’re free to tailor one per your style and preference. If only Apple allowed the same flexibility with watch faces—there is still no third-party support, there.

If it ain’t broke

The Series 7 packs a new dual-core S7 system-in-package (SiP) that’s based around the same CPU as the last gen S6. Apple hasn’t shared granular details, only that it is up to 20 percent faster than the S5. This is not the first time something like this has happened. The S5 (in Series 5), similarly, was an S4 with gyroscope. Performance has not been an issue with any of the recent Apple Watch models. The Series 7, likewise, is very fast and fluid.

The bigger hardware upgrade, though, is coming by way of faster charging. The Series 7 bundles a USB Type-C charging dock in the box and can charge up to 33 percent faster compared with the Series 6. Sadly, this feature is not available in India due to regulatory reasons at the time of writing. The Series 7 takes nearly two hours to charge from zero-100%. Battery life overall—18-hour—remains unchanged from last year which means, it’s still pretty good.

Like the previous models, the Series 7 is also available with and without LTE. Cellular versions work through eSIM, which means you can make/receive phone calls directly from your wrist. Connectivity and reception are excellent. The speaker onboard, can punch way above its weight class.

Apple hasn’t introduced any new major health or fitness feature in the Series 7. Perhaps it wasn’t needed. The Series 6 was, already, ahead of its time in many ways. It was the first Apple Watch capable of blood oxygen saturation monitoring, for instance. Think of Series 7 as a Series 6S— it takes all those good things, adds a bit of extra polish, and gives you a slightly more refined, if a little familiar package. This approach, somehow, makes more sense in a smartwatch than a smartphone. This gives Apple ample time to fine-tune those sensors, make them more useful, more accurate. That’s what we want from a smartwatch—more accuracy.

The difference, though, isn’t like night and day. Maybe that’s how good the Series 6 was (it still is), we can’t say for sure.

Like its predecessor, the Series 7 can track SpO2 both manually and automatically. It is a hit and miss, even today, and would need you to wear the watch in a certain way for best results. If all goes well, the Series 7 will show you a reading in 15 seconds. Normal oxygen saturation is between 95 to 99 percent for most people.

The Series 7, also, can do ECG, heart rate notifications, irregular rhythm notifications, noise detection, menstrual cycle tracking in addition to sleep tracking. There were rumours that the Series 7 would bring blood pressure measurement but evidently, that was a false alarm. Samsung’s Galaxy Watch 4 can do this, but the feature isn’t available in India yet.

All said and done, it must be understood that a smartwatch like the Series 7 is not a diagnostic tool. It’s not a replacement for a pulse oximetre, for instance. It’s a companion device that’s there to motivate you and let you track your body trends over time. For what it’s worth, the Series 7’s accuracy was fairly on point most of the time during our testing.

Apple Watch Series 7 | Should you buy

The Series 7 starts at Rs 41,900 for a 41mm aluminium version with GPS/Wi-Fi, while the cellular version starts at Rs 69,900. Like clockwork, it is bigger, better, faster, and stronger—and pricey.

Now, all these upgrades may not seem ground-breaking, they’re cosmetic really, but they all work together to refine what was already, the best smartwatch in the world, aka the Series 6. We called it “better than the best” in our review, so be sure to check that out.

If you can afford it, the Series 7 is obviously the way to go. For most people though, the Series 6 will offer more value. Apple doesn’t officially make one anymore, but you can get it via third-party online and offline retail outlets (until stocks last) and chance are, you’ll get it at lower prices.