The Apple vs Android debate continued on the internet after the launch of the new Apple iPhone 7 on September 7. 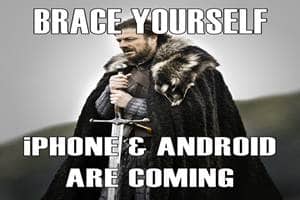 These memes were often of the offending variety, causing severe burns to both Apple and Android.

The Apple vs Android debate continued on the internet after the launch of the new Apple iPhone 7 on September 7. The debate, that dates back to the inception of mankind, saw Android users trolling the iPhone users, who were already contemplating how much property to sell after the prices were revealed. Apple’s removal of the audio jack  added fuel to the fire. Apple users, though, remained adamant on their stand of being classy enough to own the “best” smartphone, the world has seen.

Also Read
No need to disable ‘Read receipt’: Here is how to read WhatsApp messages without blue tick notifications
Saregama Carvaan Musicbar with Karaoke: It sounds great and is wallet-friendly too
10 hidden Google tricks we bet you didn’t know!
Powerful Chipset and Blazing Fast Charging: With OnePlus 10T 5G, OnePlus has unleashed the ultimate flagship of 2022

This debate took a rather ugly turn with social media warriors launching a meme attack on both sides. These memes were often of the offending variety, causing severe burns to both sides. Most of these memes could not be reported to the public due to their content. While the healing may take a year for the Apple fanboys as the iPhone prices go down, it is to be understood that the next iPhone would also be launched at the same time. This would mean another wave of attack from the Android trolls.

Apple though still stands tall like King Leonidas from the movie 300, Android, like the Persians have a million soldiers and a rare Apple traitor who equally regrets being an Apple user. Some Apple loyalists also expressed their fear of losing the wireless Airpods on social networking site Twitter. It was reported that these users belong to a common category of patient people, who have no issues with untangling their wired earphones for half of their lives.

While it cannot be denied that the Apple iPhone 7 comes with an abundance of new features to attract its users and gain more in a bid to reestablish its hold on the smartphone empire, it has to be noted that Android has already been there and done that. While the fight between both sides doesn’t look anywhere close to having an end, it surely makes for great memes and a generous source of entertainment. For Android users, of course.