Android apps can be manipulated to access built-in sensors in smartphones and track your whereabouts and traffic patterns, without your knowledge or consent, a new study has warned. 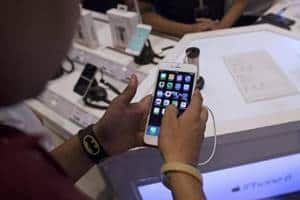 Scientists, including one of Indian-origin, have developed a new technique that could help law enforcement officials gather data from smartphones while investigating crimes. (Reuters)

Android apps can be manipulated to access built-in sensors in smartphones and track your whereabouts and traffic patterns, without your knowledge or consent, a new study has warned.

Researchers from Northeastern University in the US built an Android app and tested it.

Their system uses an algorithm that inserts data from the phone’s built-in sensors into graphs of the world’s roads.

The researchers applied the algorithm to various simulated and real roadtrips.

For each trip, the system then generated the five most likely paths taken. The results showed that there was 50 per cent chance that the actual path taken was one of the five.

“For USD 25, anyone can put an app on Google Play, the store for Android apps. Some of them may be malicious – no one is screening them,” said Guevara Noubir, professor at Northeastern University.

If an Android app wants to access sensitive user information, such as location, it must let the user know.

However, often permission for such access is buried in terms-of-use agreements – the small print that many users do not read – or comes up after the app is downloaded, when access for that information kicks into gear.

Android apps present further privacy risks because they automatically have access to key sensors inside the phone that detect the device’s location, movements and orientation.

Together these sensors can provide clues to everything from the route you take to work to whether you carry your phone in your pocket (the phone is relatively stable) or your purse (it swings).

“In our research we show that an app in fact does not need your GPS or Wi-Fi to track you,” said Noubir.

“Just using these sensors, which do not require permissions, we can infer where you live, where you have been, where you are going,” he said.

To gauge the effectiveness of the system, the researchers conducted two types of tests.

They simulated drives in 11 cities around the world including Berlin, London, Rome, Boston, and Atlanta.

They also got behind the wheel themselves, driving for 1,000 kilometres over more than 70 different routes in Boston and Waltham, Massachusetts.

In both tests they collected scores of measurements derived from the phones’ changing positions, including the angles of turns and the trajectory of curves.

“Inferring a driving pattern from an Android app can lead to much greater invasions of privacy, such as where the user lives and works,” said Noubir.

Additional information can then be gleaned by searching town and city public databases, he said.

“You should not install apps that are not familiar to you – ones that you have not investigated,” said Noubir.

“Be sure that your apps are not still running in the background when you’re not using them,” he suggested.

He also advises uninstalling apps that are not used frequently.

Follow us on
Most Read In Technology
Sonos Five Wireless Speaker: Purely for the purists
1
No need to disable ‘Read receipt’: Here is how to read WhatsApp messages without blue tick notifications
2
How to send WhatsApp messages from website without saving a number
3
The teen app store: Creating a digital landscape for teenagers
4
WhatsApp feature trick: How to hide your view on your friend’s WhatsApp Status
5
10 hidden Google tricks we bet you didn’t know!
6
WhatsApp tips and tricks: Step by step guide to scheduling your messages on Android and iOS
7
How to use WhatsApp without keeping the app on your phone
8
Got Rs 30,000? Get a OnePlus Nord 2T: The Essential Smartphone you should own!
9
Top 10 internet broadband providers in India that offer unlimited data at Rs 1,000
10
Latest News
Think before you drink: When your beverage causes dehydration
TRS government in Telangana has become a symbol of dynastic and corrupt politics: BJP
Russia claims capture of pivotal city in eastern Ukraine
Domestic housing sector set to grow in next 5 years: PNB Housing Finance
‘Ishq Vishk Rebound’ team wraps up first schedule
JEE Main 2022 Session 1 Answer Key (OUT) on jeemain.nta.nic.in — here’s how and where to download
ECLGS: Loans worth Rs 3.32 lakh crore sanctioned to MSMEs, others till April 2022, shows RBI report
Photos
Monsoon arrives in Delhi! Brings much-needed respite from heat and also chaos on roads; Enjoy rain pictures
3 days agoJune 30, 2022
In Pictures | PM Modi’s warm moments with world leaders during G7 Summit in Germany
5 days agoJune 28, 2022
Assam floods: These images show you the grim situation in state
1 week agoJune 23, 2022
Read More
×
Pakistan’s trade deficit hits record-high of USD 48.66 billion as imports soar
How brands can approach B2B marketing
Got Rs 30,000? Get a OnePlus Nord 2T: The Essential Smartphone you should own!
DU’S NCWEB invites application for appointment of guest faculties
Amarnath Yatra: Over 40,000 pilgrims visit holy cave shrine so far; 5 dead
Israel’s caretaker PM Lapid holds first Cabinet meeting