Tech powering the life saving wheels: The science of IT in an ambulance 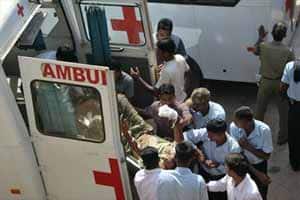 The siren of an ambulance is enough to make us crane our necks and speculate on the nature of the emergency, but few of us pause to wonder at the infrastructure and technology behind the service. The ubiquitous 108 ambulance is one of the world’s largest integrated emergency services, with 8,300 vehicles in operation, covering 75 crore people – more than half of India’s population.

The government partners with private companies to run the service and the largest of these partnerships involves the infrastructure group GVK. While GVK, under its CSR division of GVK Foundation, handles the senior leadership, technology, innovation and collaboration in this public-private partnership, the operating expenses are handled by the state governments.

According to GVK EMRI (Emergency Management and Research Institute), 85-90% of its users are the rural poor, spread across 15 states and two union territories. EMRI employs 36,000 people including paramedical staff. It has responded to over 3.3 crore emergencies and saved over 10 lakh lives.

EMRI handles medical, police and fire emergencies through the 1-0-8 emergency service. By bringing the entire operation under a single umbrella, the non-profit organisation could leverage technology, thus reducing the overall cost of operating such a service. With the help of geographic information system (GIS) and global positioning system (GPS) information, EMRI has reduced its fuel consumption by pinpointing the ambulance location and gathering real time traffic information. EMRI handles about 25,000 emergencies in a day and uses Google Maps API to visualise its ambulances in the area and assign the closest free ambulance to a particular emergency apart from getting traffic details from the internet company’s map and navigation application.

“The time taken to reach a person is particularly important as a delayed response can result in a life being lost,” says Siddhartha Bhattacharya, vice president and technology head, EMRI. “The ambulances are decided on the basis of closeness, the expected time to reach the location and the medical facilities the patient requires during the time. The availability of ground personnel, the route and map information and operational insights are factored in by the technical team to increase its efficiency and speed of delivery of services,” he adds.

The organisation handles about 3,000 vehicular trauma emergencies every day on average, aggregating to 40 lakh road traffic incidents so far. India sees over 140,000 lives being lost annually in road accidents. EMRI has developed regional trauma systems that provide injured people with life saving care at the roadside, rapid transport and timely treatment of their injuries, says Bhattacharya.

The 30-acre main campus of EMRI in Hyderabad is equipped with modern facilities for emergency management system, a programme developed and run in partnership with IT services firm Tech Mahindra. EMRI has also harnessed strong linkages and alliances with hospitals, doctors, fire stations etc. apart from partnering with the police department to track the exact location of the caller. It employs technology in distress communication and management by establishing an emergency response system that coordinates every emergency through a single toll free number, 108, accessible from all fixed and mobile telephones. The ambulances are equipped with a well-trained emergency medical technician to render quality pre-hospital care and to move the patient to an appropriate healthcare facility.

According to Bhattacharya, the organisation’s vision is to able to respond to three crore emergencies, saving up to 10 lakh lives annually. He says that since the organisation is already the most efficient, speedy and reliable service provider, it makes sense for others to pool resources with EMRI. It also plans to widen its scope to include various other emergency services under one roof, to be handled across the states in association with the respective governments. “The service, also available through an app, has created a distinctive technology infrastructure that is readily deployable and scalable apart from most processes being automated,” says Bhattacharya.