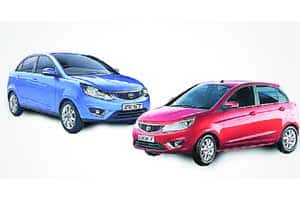 To avoid long waiting period faced by buyers after Tata Motors rolled out its much-anticipated entry-level sedan Zest in September, the company is adequately stocking dealerships with enough units of the Bolt, even before the new hatchback is launched on January 22.

“We did a lot of pre-launch activities for the last few weeks and have got almost 30,000 customers who have registered to know more about the Bolt (registrations are treated as enquiries that have a greater chance of converting to sales),” Mayank Pareek, president of the passenger vehicles business unit at Tata Motors, said. “Consequently, we have stocked dealerships to take care of two to three weeks of sales.”

Pareek refused to share an exact number with respect to the number of cars of the new model that have been made available to the dealers or sales targets for the Bolt.

The Bolt is a hatchback based on the same platform as the Zest, and is one of the first set of cards to be launched as a part of the carmaker’s Horizonext strategy, which was initiated by its late MD Karl Slym, and entails offerings cars with a new design language and an improved engineering performance.

The company is relying heavily on the success of new offerings like the Zest and Bolt to turn around its fortunes in the domestic passenger cars market, where it has lost out on market share to rivals like Maruti Suzuki and Hyundai.

The Zest, which was the first car to be launched by Tata Motors after five years, received a warm response from potential car buyers and appeared to have taken the company by surprise, especially as far as the automated manual transmission (AMT) variant was concerned.

Pareek stated that Tata Motors has progressively ramped up production, brought down the waiting period for the Zest from six months earlier to three-four months at present.

The Zest has been selling well over the last few months and has been accounting for a major portion of Tata Motors’ domestic car sales. In December, Tata Motors sold around 4,000 units of the car and took fresh bookings for 4,800 more cars, Pareek said. The number of Zest units sold in December accounted for nearly a third of the total number passenger cars sold in the month, up 29% over the year earlier at 12,183 units.

Pareek said that he hoped new launches like the Zest and the Bolt will help Tata Motors grow its sales at a time when the domestic auto market is yet to recover from the impact of the economic slowdown in the country over the last couple of years.

There was no growth in the passenger cars segment in Q1FY15, and growth picked up somewhat in the second and third quarters, which include the festive season,” Pareek said. “But as the last quarter begins, the rollback of excise duty incentives comes as a speed breaker to growth. In such times, it is important to launch new cars that can lure customers to the showrooms and persuade them away from deferring a decision to buy a new car.”

Revving up
* Stocking dealerships with enough units of the Bolt, even before its launch on January 22
* Relying heavily on the success of the Zest and Bolt to turn around its fortunes in the domestic passenger cars market, where it has lost out to rivals like Maruti Suzuki and Hyundai
* Progressively ramped up production, brought down the waiting period for the Zest from six months earlier to 3-4 months at present
* In December, Tata Motors sold around 4,000 units of the car and took fresh bookings for 4,800 more cars