Coal India strike will affect coal mining operations severely, which is estimated to be around 1.3 million tonnes every day… 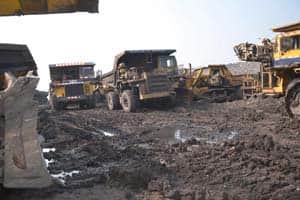 The strike called by the trade unions of Coal India (CIL) will continue on Wednesday as talks that continued till late on Tuesday with coal secretary Anil Swarup failed to reach an agreement.

The five trade unions of Coal India (CIL) — INTUC, AITUC, CITU, HMS and BMS — have sought the intervention of the Prime Minister to address their demands. They had boycotted meetings with the government on two earlier occasions.

“The strike will continue. The government has refused to withdraw the coal ordinance that in effect leads to the denationalisation of coal mines,” said AK Padmanabhan, president, CITU.

The Bharatiya Mazdoor Sangh (BMS), which is perceived as the trade union wing of the BJP has also supported the strike. “The ordinance must be withdrawn. All trade unions are speaking in one voice on the issue,” said BN Rai, president, BMS.

“We also told the government that there is no need to disinvest equity in CIL as the company has enough funds for its expansion,” said G Sanjeeva Reddy, president INTUC, adding that the trade unions will now only discuss their demands with the Prime Minister.

The strike will affect coal mining operations severely, which is estimated to be around 1.3 million tonnes every day of production coming to a standstill. It comes at a crucial juncture when the company was ramping up output to meet the target of 520 million tonnes in 2014-15. CIL had produced only two-thirds of the target so far.

While other unions have ruled out further talks with the coal ministry until the ordinance is withdrawn, Rai of the BMS said that talks would be held on Wednesday and the union would send one representative.

CIL chairman Sutirtha Bhattacharya told PTI that he was “hopeful the situation would be resolved in an amicable manner”.

“The precise impact of the strike would be known later and it would be premature to predict (the impact) at this juncture. It is true that production picks up tempo in the last quarter, as the closure of fiscal draws near. It is unfortunate that the unions have called the strike,” he said.

The five-day strike call by the unions could have a cascading impact on the country’s power sector, especially the non-pithead based plants in the northern and western parts of India. The company, which is responsible for almost 80 per cent of domestic coal production, had recently stepped up supplies to power plants facing severe fuel shortages, in anticipation of the stress on supplies the strike could entail.

According to latest available estimates, while fuel availability at 42 coal-based plants having a combined capacity of 46,610 MW, was deemed to have ‘critical’ coal stocks of less than seven days as on January 1, 20 of these plants were said to have super-critical stocks, or have less than four days of coal supply. These plants, officials said, would be most vulnerable if the strike were to run its course.

A continued strike will impact people across India, and more so for consumers in the power deficient northern and southern regions, resulting in long unplanned outages.

The options before generation utilities include running plants with a higher blend of imported coal to tide over the deficit in domestic supplies, something that can be done in case of newer plants but is not an option for older plants having boilers that cannot take high-calorific imported coal blends of over 10 per cent.

Additionally, there would be a tariff impact if a higher proportion of expensive imported coal were to be used in thermal plants.

A senior power ministry official said that contingency plans are being worked out for the strike running beyond two days.