SpiceJet needs to show at least Rs 200 crore in bank by month-end to convince us: Govt official

Operations normal on Friday; 132 flight took off by 3 PM across airports. 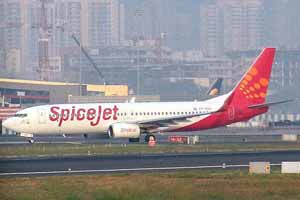 Beleaguered low-cost carrier SpiceJet, which is in advanced talks with potential investors led by former promoter Ajay Singh, needs to have at least Rs 200 crore in its bank accounts by end of the month if it is serious about its revival plan, a top civil aviation ministry official said on Friday. If the airline is able to show the funds, the government may be willing to extend further support in terms of extending the credit period for outstanding dues to Airports Authority of India (AAI).

The ultimatum comes even as the Kalanithi Maran backed carrier saw flight operations running almost smoothly for the second day in a row, after cancelling most flights on Tuesday and Wednesday because oil marketing companies (OMCs) refused to offer jet fuel uplift on credit.

“At least Rs 200 crore is needed in their (SpiceJet) bank accounts by December 31. We have told them to show the money to show they are sincere. Ajay Singh has said that he wants to take back the airline and is getting few investors from overseas,” the ministry official said, adding that the airline is expected to submit an investment plan next week.

By 3 PM on Friday 132 flights had taken off, while a day before (Thursday) 218 of 230 planned flights operated. The current schedule is in stark contrast to the approximately 340 flights a day that SpiceJet operated as recently as July this year when it had 35 Boeing 737 and 15 Q400 aircraft. It has since cut back its fleet of Boeing 737 to 22 by retiring older aircraft with higher operational costs.

A company statement said that the airline has operated extra flights since Wednesday evening to accommodate backlogged passengers in locations such as Port Blair and Goa. “SpiceJet is pleased to announce that it is continuing to operate its full schedule of flights. Since its return to normal operations yesterday of 230 flights a day, air-fares which had gone to astronomical levels are once again coming back to more normal levels. We apologize once again for the inconvenience caused to customers from our flight disruptions earlier this week”.

With a white knight in the form of investor Ajay Singh said to be around the corner, SpiceJet on Thursday cleared its OMC dues of about Rs 14 crore. However, it still has about Rs 2,000 crore of liabilities, of which Rs 1,400 crore needs to be cleared immediately for it to stay active. This includes Rs 200 crore of AAI dues, about Rs 700 crore with aircraft lessors. SpiceJet has also not paid salaries to employees in the top 15% wage bracket that includes most pilots and senior management.

Earlier this week the government relaxed a previous ban on bookings beyond 30 days by allowing it to book up till March 31st. If the airline can regain the consumer confidence lost from the major cancellations, the move can give a major boost to the airline as the cash generated from forward bookings can help generate daily working capital. Company sources said that the company is currently getting less than Rs 1 crore a day from bookings, which till last month stood at Rs 14-15 crore a day.

Asked if SpiceJet will ask the government to allow it to book flights beyond March-end, a company official said, “Yes, we will apply for that when ready.”

The civil aviation ministry also extended an olive branch by giving the airline time till the month end to pay AAI charges. It asked OMCs to also offer a similar credit period and requested banks to give a Rs 600 crore loan on a personal guarantee of Kalanithi Maran.
On Friday, the SpiceJet scrip at the BSE closed 19.7% up to Rs 15.80 on the back of news that the airline has found fresh investment. Ajay Singh, who started SpiceJet along with UK-based Bhupendra Kansagra between 2005 and 2010, had sold his stake to Sun Group’s Maran. He is now speculated to be brining in Rs 1,200 crore to turnaround the company.

SpiceJet, which posted a record loss of Rs 1,003 crore in 2013-14 and has run up accumulated losses of Rs 2,958 crore, currently apart has a negative net worth of Rs 1,459 crore. The airline’s domestic passenger market share in November fell to 14.9% – the lowest point for the year so far.

More Stories on
SpiceJet
Next Story
Indian rupee down 19 paise at 63.30 Vs US dollar