New Delhi Industrial explosives maker Solar Industries India has bagged a contract worth Rs 443.44 crore, the supplies for which will continue into the next fiscal. 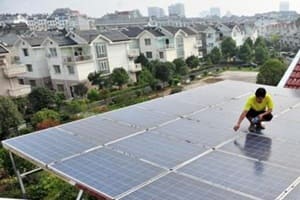 "The recent KERC regulations pose a challenge to wind and solar energy generation entities in Karnataka due to the variable and intermittent nature of generation from these sources and the limited track record and experience of the Indian renewable energy (RE) players in forecasting with the required accuracy (+/-15%)," ICRA Senior Vice President Sabyasachi Majumdar said in a press release. (Reuters)

New Delhi Industrial explosives maker Solar Industries India has bagged a contract worth Rs 443.44 crore, the supplies for which will continue into the next fiscal.

It had reported a 20.24 per cent increase in net profit for the March quarter at Rs 48.22 crore on higher sales. It had a net profit of Rs 40.10 crore in the corresponding quarter of the previous fiscal.

The company entered into the defence sector four years ago and has set up country’s first HMX plant in private sector, a large composite propellant plant and facilities for producing various other products like war heads.

It plans to start commercial production in South Africa where it will manufacture bulk explosives and cartridges among other with a total capacity of 30,000 metric tonne. The company has invested $7 million in the facility.