E-commerce company Snapdeal is understood to be on its way to acquiring online fashion retailer Jabong. “The term sheet is almost ready with Snapdeal’s legal team visiting Jabong’s office in Gurugram, 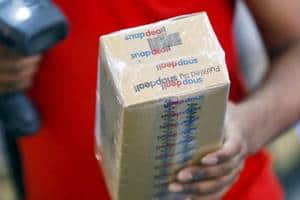 "There is a short-term dip in the COD business mode. Specifically, discretionary purchases have taken a dip," Bahl told reporters at IIM Calcutta. (Reuters)

E-commerce company Snapdeal is understood to be on its way to acquiring online fashion retailer Jabong. “The term sheet is almost ready with Snapdeal’s legal team visiting Jabong’s office in Gurugram,” two people close to the development said on condition of anonymity. The Global Fashion Group (GFG)-owned Jabong has been on the lookout for a buyer for about a year now.

In the last one year several companies such as Future Group, Reliance Retail, Aditya Birla Group’s Abof and Flipkart are believed to have shown some interest in buying the fashion e-tailer.

While Jabong has managed to reduce losses by reducing discounts, both AB Kinnevik and Rocket Internet appear unwilling to infuse fresh capital, sources said. In April this year, GFG raised fresh funding from existing investors at a lower valuation. The company raised 300 million euros from Rocket Internet and Kinnevik. Post the last round, GFG was valued at 1 billion euros a fall from its earlier valuation of 3.1 billion euros.

In a recent interview to FE, Sanjeev Mohanty, CEO, of Jabong said that e-tailer is planning to shed around 400 low-margin brands, including some of its private labels, to cut losses as well as position itself as a platform for premium lifestyle products. The e-tailer has already reduced discounts, is focusing on launching 20-30 new brands by the year end, and is going slow on hiring as it is targeting to become profitable by mid-2017.

The fashion e-tailer has already brought discount down from around 50% to around 20% and is selling higher-end brands like Vero Moda, Mango, Mexx, Fabindia and has also tied-up with designers like Ritu Kumar, Rohit Bal, Manish Arora, Satya Paul among others.

Mohanty joined Jabong as CEO in December 2015, after the original co-founders Praveen Sinha and Arun Chandra Mohan left the company.