Value of goods sold is expected to touch $6 billion during the festive season, which is almost four times the value in last year’s season 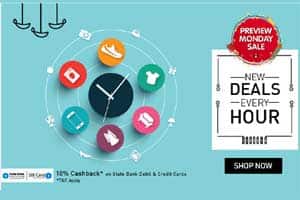 Snapdeal offers 'Preview Monday Sale' that will see discounts stretch all the way up to 70% in certain categories including electronics, fashion and home.

Snapdeal on Monday witnessed a 10 times rise in the value of goods sold on its platform compared to any other normal day. The e-commerce firm opened its first sale of the festive season in what it called “preview Monday”.

Volumes surged as well — six times compared to any other day. “the last six months we have been strengthening our supply chain and are geared to handle more than 10 times volumes as compared to Diwali last year. Our technology platform is geared to handle traffic surges without any delays or glitches,” said Rahul Taneja, vice president, category management at Snapdeal.

This Diwali, e-commerce firms expect the sale season to mark a shift in the market. An executive in one of the three top e-commerce firms said that after the festive season is over there might emerge be a new leader in the Indian e-commerce space.

Experts said that the leadership position will be defined by how well the technology has been upgraded, given that during the last sale season there were glitches and e-commerce firms had not anticipated the surge. This year firms started preparing for this right from the beginning of the year.

Snapdeal has readied itself to handle volumes 10 times of what the firm did last Diwali.

Flipkart, Amazon, Snapdeal, Paytm and Shopclues are the top five e-commerce firms that are gunning for a higher market share. Value of goods sold is expected to touch $6 billion during the festive season, which is almost four times the value of last year’s Diwali.

There was no category in particular that drove higher number — the sales volume was consistent across all categories. During peak hours, around 2,00,000 consumers were concurrently shopping on the site.