If wearables were the buzzword the past year, ‘e-skin’ could dominate technology in 2017. Here are some ‘smart’ ways your skin could soon become a cool gadget 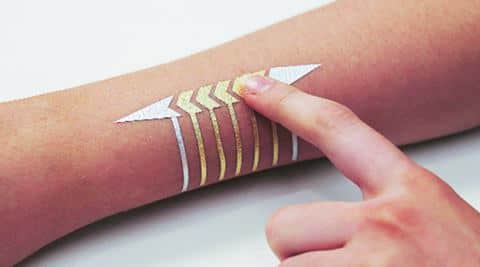 DuoSkin draws from the aesthetics found in metallic jewellery-like temporary tattoos to create on-skin devices; and the flexible silicone rubber stickers that form part of iSkin come with pressure-sensitive sensors that fit on the skin

WEARABLE DEVICES have explored all possible parts of the human body—wrist (Apple Watch), eyes (Google Glass), feet (smart shoes), etc—revolutionising the way wearable technology impacts our lives. And now, it’s going a step further. The future of wearable devices will soon be our very own skin. As per an Ericsson ConsumerLab report this year, 60% consumers believe that ingestible pills and chips under the skin will be commonly used in the next five years, not only to track vital health data, but also to unlock doors, authenticate transactions and identity, and to control objects. Such sensors might be called ‘internables’ or ‘implantables’ rather than ‘wearables’, as per the report called ‘Wearable Technology and the Internet of Things’. Here are some recent innovations and designs that show how wearable devices can actually be a part of the human skin in the near future.

SkinTrack (When your arm becomes the touchpad)

A LOT of smartwatch users often complain about the small touchscreen area. But what if you could expand the area till your arm? In simple terms, what if you could control your smartwatch using touch inputs on your skin? A new technology, created at Future Interfaces Group, Human-Computer Interaction Institute, Carnegie Mellon University, US, could make that possible by using an approach called ‘skin to screen’. Known as SkinTrack, the technology enables “continuous touch tracking on the skin”.

For this technology, the researchers use two wearable devices, which communicate with each other. One is a ring that emits a high-frequency electrical signal. The second is a wristband that picks up those signals. As per the Carnegie Mellon University website, when the finger gets near the skin or touches the skin, that signal propagates through the skin.

SkinTrack can not only be used as a game controller, it can also assist in navigating between apps on a smartwatch. One can use the back of the hand as a dial pad for the onscreen number pad. ‘Finger hover location controls’ and an onscreen cursor help in targetting buttons by highlighting numbers on the screen. One can also zoom in and out of maps or draw. Another use is in global gestures—drawing gestures like ‘N’ or ‘A’ on your skin can be assigned to apps like ‘news’ and ‘address book’, respectively.

Although the technology is not yet available for the general public, the fact that it can be integrated into smartwatches makes it an exciting prospect for the future. As per the paper, the researchers “envision the technology being integrated into future smartwatches, supporting rich touch interactions beyond the confines of the small touchscreen” because their approach is compact, non-invasive, low-cost and low-power.

IMAGINE IF instead of pulling out your ringing smartphone from your pocket, you could reject an incoming call just by pressing one of your fingers. Developed by the computer scientists of Max Planck Institute for Informatics and Saarland University in Germany, iSkin is a range of skin-worn sensors for touch input on the body. These sensors are made of biocompatible materials and are stretchable. They can also be recreated in different shapes and sizes to fit various parts of the body like the forearm, finger or ear. The technology explores the potential use of the human body as a “touch sensitive surface for controlling mobile devices”.

The flexible silicone rubber stickers that form a part of the technology come with pressure-sensitive sensors that fit on the skin. What sets iSkin apart is that users can create their own personalised designs for the sticker. One sticker, for instance, is based on a musical notation, while another is circular like an LP record.

iSkin can be used for many applications. A keyboard sticker, for instance, could be used to type and send messages. As per Jürgen Steimle, the leader of the research team, in-built microchips might, in the future, allow skin-worn sensor patches to communicate wirelessly with other mobile devices. “They are also skin-friendly, as they are attached to the skin with a biocompatible, medical-grade adhesive. Users can, therefore, decide where they want to position the sensor patch and how long they want to wear it,” said Steimle in a press release.

The initial prototypes of iSkin were connected only to a computer. But in their research paper, the scientists said that iSkin is an input interface and can have a wide array of uses when utilised with wireless technology. “It allows for static visual guidance by indicating interactive areas. However, due to the flexible placement of the sensor, and especially if coupled with wireless communication, it can be combined with many additional output devices: smartphones, smartwatches, laptops or nearby computers,” the paper said.

The iSkin project is in its prototype stage as of now. A news report said that while the team has no immediate plans to develop it further, they hope it will inspire future research on electronic skin for human-computer interaction.

Exposure to ultraviolet (UV) radiation and skin pigmentation occupy top spots in any discussion related to protection from the sun. But it’s virtually impossible for the common man to figure out how their skin is affected after prolonged exposure to UV rays. But now, consumers can be more aware about the subject, thanks to a device they can carry not in their pocket, but on their skin itself.

The patch is a transparent adhesive that stretches and adheres directly to any area of skin that consumers want to monitor for UV exposure. As per L’Oréal website, the patch measures approximately one square inch in area and half the thickness of an average strand of hair. It contains photosensitive dyes that factor in the baseline skin tone and change colours when exposed to UV rays to indicate varying levels of sun exposure.

Using and getting inputs from the patch is easy. Consumers can click a photo of the patch and upload it to the La Roche-Posay ‘My UV Patch’ mobile app, which evaluates the varying photosensitive dye squares to determine the amount of UV exposure. The app—which will be available on both iOS and Android—uses near field communication for the patch-scanning process.

Once you stick it on the skin, the patch can work for five days. It is waterproof, requires no batteries and, as per various news reports, there are no initial costs. It has been launched in markets around the world and is also available on the La Roche-Posay website.

DuoSkin (A tattoo to control your smartphone)

IN THE near future, a tattoo won’t just be an extension of your personality. You would be able to use it to control your smartphone or even communicate using near field communication (NFC). Students at US’ MIT Media Lab—in collaboration with Microsoft Research—have created DuoSkin, which enables wearable devices to be attached directly on to the skin. As per the MIT Media Lab website, “DuoSkin is a fabrication process that enables anyone to create customised functional devices that can be attached directly on the skin… DuoSkin draws from the aesthetics found in metallic jewellery-like temporary tattoos to create on-skin devices, which resemble jewellery.”

Using DuoSkin, the students at MIT Media Lab have created three different kinds of on-skin user interfaces: sensing touch input; displaying output; and wireless communication. For input, they created ‘on-screen input elements’ like buttons, sliders and 2D trackpads. For output, DuoSkin brings soft displays on to the skin, using thermochromic pigments that can change colour at a defined temperature. This means that the tattoo can display information such as change in a person’s body temperature or mood. For communication or exchanging data between on-skin interfaces, DuoSkin uses NFC.

Those worried about its safety must know that the people at MIT Media Lab used skin-friendly ‘gold leaf’, which is not only attractive, but durable as well. And this makes it perfect for daily situations.

So what all can one possibly do with DuoSkin? Users can control their mobile devices (control music, etc), display information (even an individual’s mood) and store information on their skin. Simultaneously, a DuoSkin device also serves as “a statement of personal style”. Currently, it isn’t available in the market, but related research was presented at the recently-concluded 2016 International Symposium on Wearable Computers, a prominent academic conference on wearable computing, for feedback.

* With inputs from research and company websites