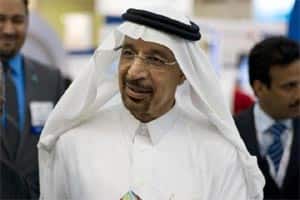 The statement said Khalid al-Falih and the Organization of the Petroleum Exporting Countries' newly appointed secretary general, Mohammed Barkindo, had met in the Saudi city of Dhahran to discuss the role of OPEC in maintaining the stability of oil markets. (Reuters)

Saudi Arabia on Saturday fired its long-serving oil minister Ali al-Naimi as part of a larger ongoing government shakeup. A royal decree announced that he has been replaced by former Health Minister and Saudi Aramco board chairman Khaled al-Falih.

Under a new Saudi leadership led by King Salman, the king’s son Deputy Crown Prince Mohammed bin Salman has largely been overseeing Saudi economic policy along with a handful of new ministers. The changes announced come as the government plans wide-ranging reforms aimed at overhauling the Saudi economy amid lower oil prices that have eroded state revenues.

With the importance of oil declining, Riyadh has decided it is wiser to prioritise market share. It believes it will be better off producing more at today’s low prices than reducing output, only to sell the oil for even less in the future as global demand ebbs.

One thing is guaranteed: The kingdom will not go back to the old pattern of cutting output any time soon to support prices for the benefit of all producers.

Among the changes planned by Mohammed bin Salman and announced last month was a plan to publicly list less than five percent of Aramco to create a massive sovereign wealth fund to develop its cities.

Aramco boasts the world’s largest oil reserves and produces some 10 million barrels of crude a day, giving it outsized influence over world energy markets. The deputy crown prince put the estimated value of Aramco at more than $2 trillion.

Also on the block: chunks of other companies in up to 18 sectors, including healthcare, mining and transport.

As part of his Vision 2030 reform plan, Prince Mohammed said the state-controlled Public Investment Fund had been restructured to become a hub for Saudi investment abroad, partly by raising money through sales of shares in national oil giant Saudi Aramco.

This said would transform the kingdom into a global investment power and wean the world’s top oil exporter off crude by 2020. The plan was a recognition that an economy based purely on energy can be vulnerable to external shocks.

Prince Mohammed told Bloomberg last month that the PIF, would be expanded to control over $2 trillion eventually. The fund is now believed to have about $100 billion of assets.

The phased removal of subsidies on fuel, water and electricity — part of the welfare lavished on Saudis, of whom about four out of five workers hold public sector jobs — is already underway.

In December, Saudi Arabia raised petrol prices — a step previous administrations had hesitated to take for fear of public backlash — Saudis took the move in stride.

The idea behind the kingdom’s new vision plan is to create millions of new jobs and raise the participation of women in the workforce from 22 currently to 30 percent by 2030.

The kingdom’s sale of a spot crude cargo to an independent Chinese refiner marks a new phase in the turf war for dominance over Asia’s oil market and sends a strong message to its rivals Russia and Iran: the fight for market share is on.

State-owned Saudi Aramco, the world’s biggest oil exporter, last month sold 730,000 barrels of crude for June-loading to Chinese refinery Shandong Chambroad Petrochemicals, one of about 20 independent refineries in China nicknamed “teapots.” This is Aramco’s first spot sale to a teapot.

The kingdom plans to launch a green card system within five years to enable expatriate Arabs and Muslims to live and work long-term in the country, This would be a major shift for the insular kingdom.

Following various models across the world

Another model is Malaysia, which in 2010 moved to diversify beyond commodity exports and attract more foreign investment. Consultancy McKinsey & Co played a major role in the Malaysian plan and is now at the centre of the Saudi effort.

The NTP echoes Malaysia’s programme in three ways. It puts a single body in charge of implementation to force better cooperation between ministries. It seeks feedback from the private sector early, even during planning. And it aims to boost the private sector’s share of investment, something Saudi planners consider vital as oil revenues sag.

Riyadh wants private firms to develop tourism facilities on some of its islands, plans to create “free zones” with minimal red tape near airports, and even wants private investment in some schools.

New infrastructure such as roads and port facilities will be constructed under build-operate-transfer contracts, in which private firms finance the projects and then operate them to recoup their investments. “The government will take no risk anymore, it will only provide opportunities,” said a Saudi economist who attended a recent workshop.

Management of the country’s financial reserves will become more aggressive, according to officials and consultants. The central bank, which acts as the kingdom’s sovereign wealth fund, holds $584 billion of foreign assets, mostly in conservative investments such as bank deposits and U.S. Treasuries. In the future, privatisation proceeds will be invested in corporate assets around the world, generating income and obtaining access to technology and expertise.

Saudi officials have been visiting the Abu Dhabi Investment Authority – which has over $700 billion invested in developed and emerging market equities, fixed income, private equity, real estate and infrastructure – to see how it works, sources said.