The Sardar Patel ‘Statue of Unity’ is located approximately 3.5 km downstream from the Sardar Sarovar Dam, on Sadhu Hill on the bed of the river Narmada. 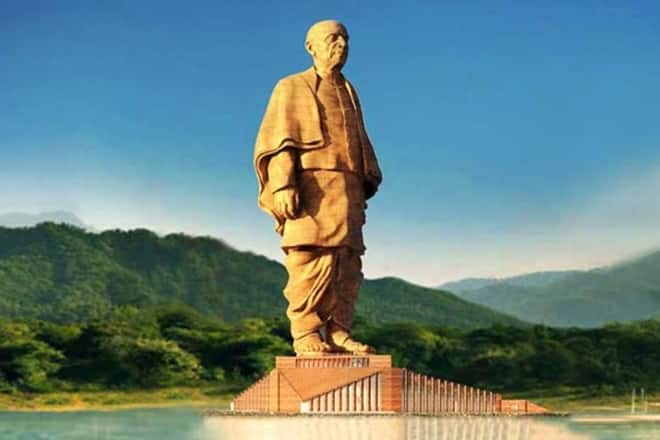 The much awaited 'Statue of Unity' — a statue of Iron Man of India, Sardar Patel — is all set to be unveiled in Gujarat on Wednesday

The much awaited ‘Statue of Unity’ — a statue of Iron Man of India, Sardar Patel — is all set to be unveiled in Gujarat on Wednesday amid the controversy over China’s involvement in building it. Prime Minister Narendra Modi’s pet project is being described as the world’s tallest statue.

Sardar’s Patel statue has been built in 33 months (less than 3 years), while China’s Spring Temple Buddha took 11 years to complete.

Tallest in the world

Statue of Unity, at At 182 metres, will be the tallest statue in the world, leaving 153 metre-high Spring Temple Buddha behind. Moreover, the statue will be double the height of the world-famous Statue of Liberty in New York.

The statue’s surface has been created using 553 bronze panels, which were cast in a foundry in China. It was part of an “international bidding process since there was no such facility in India that could make panels of that size”, news agency PTI quoted Sardar Sarovar Narmada Nigam Limited (SSNNL) Superintending Engineer RG Kanungo as saying.

The Comptroller and Auditor General (CAG) in June had questioned the decision of using corporate social responsibility (CSR) funds of Central Public Sector Enterprises (CPSEs). As per its report, the statue is being built through a government of Gujarat organisation named ‘Sardar Vallabhbhai Patel Rashtriya Ekta Trust (SVPRET)’.

SVPRET approached ONGC, HPCL, BPCL, IOCL, OIL for the contribution of their CSR funds as there was a shortfall. “All the five CPSEs contributed a total of Rs 146.83crore (ONGC
Rs 50 crore, IOCL Rs 21.83 crore, BPCL, HPCL, OIL Rs 25 crore each) towards this project under CSR… Contribution towards this project did not qualify as CSR activity as per schedule VII of the Companies Act 2013 as it was not a heritage asset,” the CAG said in its report.

The statue has been built by L&T at a cost of Rs 2,989 crore. The statue is located approximately 3.5 km downstream from the Sardar Sarovar Dam, on Sadhu Hill on the bed of the river Narmada.

The statue can withstand wind speed up to 180 kms per hour and earthquakes measuring up to 6.5 on the Richter Scale.