Sahara Group came out with another plea for the release of its jailed chief Subrato Roy before the Supreme Court. 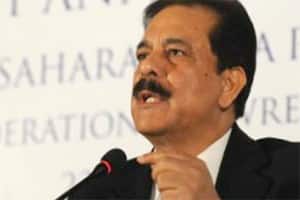 Sahara Group came out with another plea for the release of its jailed chief Subrato Roy before the SC. (PTI)

Sahara Group yesterday came out another plea for the release of its jailed chief Subrato Roy before the Supreme Court which asked those involved in the negotiation processes for sale of its three offshore hotels to prove their bona fide in raising the money to get him out.

Roy, who was sent to jail on March 4 this year for non- refund of over Rs 20,000 crore with interest to depositors, was asked by the court to pay Rs 10,000 crore to get bail, out of which Rs 5,000 crore should be paid in cash and rest of the amount in bank guarantee.

Sahara, which earlier had raised Rs 3,117 crore and deposited with SEBI, today told a bench headed by Justice T S Thakur that out of nine domestic assets it has now sold an Ahmedabad property and raised Rs 411.82 crores which has also gone into account of the market regulator.
In this background, Sahara’ counsel S Ganesh submitted that after failed endeavours, the Group has made some achievements in its bid to sell its three overseas hotels– Dream Downtown and The Plaza in New York and Grosvenor House in London–for which there is a need to amend the “terms and conditions” relating to loan and other transactions.

He further said that the Bank of China, which had lent money to it in purchasing stakes in overseas hotels, recently raised issues leading to a development in which the Sahara group has entered into an agreement with another firm for the take over of the loan.

The lawyer further said that a tripartite agreement is on the anvil which will lead to grant of a loan by a “junior” lender at a much higher interest rate and if the deal fructifies, then USD 650 million (approx. Rs 3,600 crore) would be generated.

The bench, also comprising justices A R Dave and A K Sikri, deliberated upon the concept of escrow account and sought involvement of asset management agencies to ascertain the value of the amount, likely to be fetched, from the sale of the domestic properties.

“Ask the junior lender to deposit significant sum in the escrow account to show that we get confidence that the amount is coming,” the bench said taking note of Sahara’s plea that the amount would be utilised for the payment in SEBI-Sahara Refund Account to comply with court’s directions.

The court, on being asked by the SEBI, ordered the Sahara group to provide a copy of the escrow agreement to the market regulator and posted the matter for further hearing on next Friday.

During the hearing, the bench also made queries on the recent Income Tax raids at the premises of Sahara group in national capital and wondered, “how Rs 146 crore was recovered?”.

When Ganesh said that the amount was for payment of salaries to the employees for three months and was accounted for, the bench said, “why the amount will come to Delhi and then go other parts of the country for distribution.”

Earlier, the SEBI had moved the court seeking its direction to Sahara group to give a time schedule for payment of Rs 47,000 crore to it.
In the application, SEBI had submitted that the group be directed to furnish all details before the court regarding offers it received for its three luxury hotels, which was to be put on sale to raise money to be deposited with it.

The apex court had earlier allowed Roy, 65, to use the conference room in Tihar jail complex to hold negotiations with potential buyers for selling the hotels Dream Downtown and The Plaza in New York and Grosvenor House in London.