The time required to clear residential inventory in the National Capital Region (NCR) could be 5 years, while in the Mumbai Metropolitan Region (MMR), it could be three years, according to a report by Knight Frank India. 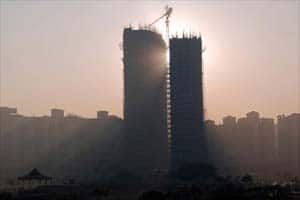 'Piramal Vaikunth' will be spread over 32 acres, and offer 2 to 3 bedroom apartments and duplexes. (Reuters image for representation only)

The time required to clear residential inventory in the National Capital Region (NCR) could be 5 years, while in the Mumbai Metropolitan Region (MMR), it could be three years, according to a report by Knight Frank India.

The inventory in South Mumbai, the most premium location in the city, could take five years to clear with the age of the inventory roughly four years. The first six months of 2015 saw worst performance by the Mumbai residential real estate market, after the global financial crisis, as the sale of properties and new launches continued to slide. According to the report, MMR has seen a y-o-y drop of 9% in absortion to 28,446 units, while the new launches fell by a sharp 47% y-o-y to 18,887 units.

Samantak Das, national director (research), Knight Frank India, said a recovery in the residential market does not seem imminent until 2015. “We expect sales to be in the range of 63,000 units which is marginally below the 2014 levels,” Das observed.

Prices in MMR are not seeing much of an upward movement. According to the report, the weighted average price in MMR stood at Rs 7,994 per sq ft in the first half of 2015, and the premium market is contracting. During January-June, the consultancy firm recorded no launches in the premium category, while the prices rose marginally about 3% y-o-y to Rs 33,025 per sq ft.

The report predicts the consumer sentiment is going to remain tepid for MMR in the July-December 2015 period as well. The region is expected to see a launch of 20,776 units, while the sales will be slightly up at a little over 34,000 units, while the weighted average price is like to remain the same in the rest of the year as well.

On an all-India level, the global consultancy firm said that launches and absorptions have reached an inflection point for the first time in the last 5 years. The launches in terms of units have seen an increase of 40% on a y-o-y basis to 95,000 units, while the sales have grown only 20% to 1,10,300 units during the first six months of the year.