Pune’s neglected public transport system recently got a shot in the arm, with the Centre allocating R950 crore for its Metro project. 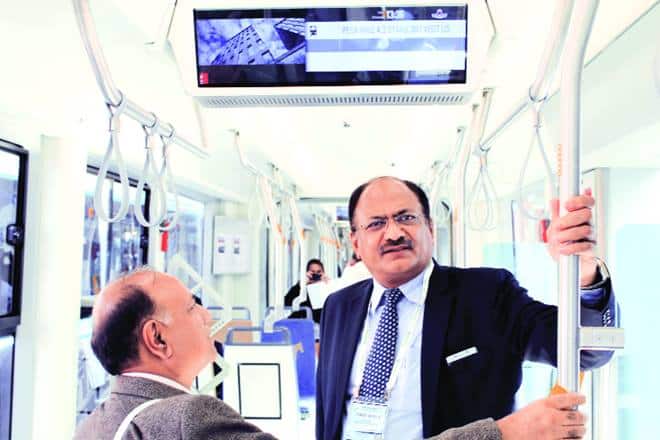 Pune’s neglected public transport system recently got a shot in the arm, with the Centre allocating R950 crore for its Metro project.

Pune’s neglected public transport system recently got a shot in the arm, with the Centre allocating R950 crore for its Metro project. Being executed by the Maharashtra Metro Rail Corporation (Maha Metro), a JV between the Centre and the Maharashtra government, work has begun on the Metro project and the bidding process is expected to start in the last week of March. Brijesh Dixit, MD, Maha Metro tells Geeta Nair the Pune Metro would be ready in 2021, with the first phase coming up within three years, and that a ridership of 5.5 lakh is expected on the network.

DMRC prepared the DPR for Pune Metro, so why not let them implement the project? Why create another entity?
Nowhere does the DPR agency implement the project. The DPR consultant only prepares the report. The same agency preparing the report and implementing the project would amount to conflict of interest. You have to have a dedicated agency as per the rules and we have a 50:50 SPV for the purpose. Maha Metro has been formed by reconstituting the Nagpur Metro. We are already executing the Nagpur Metro project where 32% progress has been achieved. We would be operationalising the first 5.5 km stretch in the second half of 2017, within two and a half years of work having started. The Nagpur Metro comes with a lot of innovative features and that is the expertise we have.

Is there anything innovative being done for the Pune Metro? What are the takeaways from the Nagpur project?
All the innovations at Nagpur will be incorporated in the Pune Metro. We have been able to come up with a 5D building information modelling (BIM) project management platform and it will go live at the Nagpur Metro in March. In the case of Pune Metro, this will be available from the start. For energy needs, we are trying to get approval from Maharashtra Electricity Regulatory Commission because it would be a new thing for a Metro system to draw 65% of its energy from solar rooftop.

How close are you to raising funds from external sources?
We are working with the department of economic affairs (DEA), ministry of finance, on it. The Metro project has a long gestation period. Since the long-term debt market is almost non-existent in India, we have to depend on external agencies—Pune Metro has a debt component of 58%. The finance ministry has identified the World Bank along with the Asian Infrastructure Investment Bank but the question is wide open. The state government also has a say in the matter.

There is no problem with the initial work as R950 crore has already been allocated by the Centre. That was an unprecedented thing as no project gets such funding in the first year.

Does the funding require state guarantees?
My understanding is that we have a central government guarantee, as with the Nagpur Metro.

What about financial viability?
The returns have to be above 8% for viability and our returns are predicted in the range of 10-11%. But we have to ensure non-fare box revenues. In the case of Nagpur, almost one-third of revenues have to come from non-fare box— stamp duty, development charges, Transit Oriented Development, property development, and advertisement. That is the trend the world over.

How much ridership have you forecasted?
The ridership estimates are 5.5 lakh for 2020. But as the city is growing, I am confident that it will be higher. From the beginning, Maha Metro has emphasised multimodal integration, first and last mile connectivity, feeder service, common mobility card, as Metro systems in India have been found wanting on this front.

Do you expect delays over environment or land issues?
There should be no delays. The Supreme Court has given a stay in the environment case and work will go on even as it hears the matter. As far as the issue of land acquisition is concerned, I am very optimistic as of the 44 hectares needed, around 32 hectares is with the government.