Srinivasan was not found to be involved in scuttling probe into match fixing scam, panel tells SC. 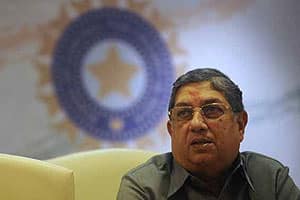 In findings that could leave IPL teams Chennai Super Kings and Rajasthan Royals vulnerable, the Justice Mudgal Committee has indicted their officials Gurunath Meiyappan and Raj Kundra of betting and confirmed their role in their teams but cleared N Srinivasan of match fixing and scuttling the probe.

The three-member Committee, in its report to the Supreme Court, however, indicted the BCCI President-in-exile for not taking action against a cricketer, who it did not name, for violating Players Code of Conduct despite being aware of it.

It confirmed Meiyappan was a team official (team principal) of CSK while RR’s owner Kundra’s “infractions violated BCCI/IPL Anti Corruption Code”.
[polldaddy poll=8454379]
A provision in the IPL code of conduct says that any team official found guilty of “bringing the game into disrepute” by betting or match-fixing, their team could be scrapped.

It also questioned why Rajasthan police stopped probe abruptly on Kundra for his betting activities after the case was transferred from Delhi police.

Further, the Committee found that IPL CEO Sunder Raman knew of a contact of a bookie and had contacted him eight times in one season.
“This individual (Sunder Raman) admitted knowing the contact of the bookies but, however, claimed to be unaware of his connection with betting activities.

“This individual (Srinivasan) along with four other BCCI officials was aware of the violation of the Players Code of Conduct by individual 3, but no action was taken against individual 3 by any of the aforesaid officials who were aware of this infraction,” the report, which was supplied to the parties today, said.

The findings on Meiyappan said, “No material is available on record to show that this individual is involved in match fixing.”

“Thus the Committee is of the view that due to the scientific evidence of voice matching and the testimony of security personnel recorded by the investigating team, the finding about the betting activities of individual 1 (Meiyappan) and the finding that he was a team official stand confirmed,” it said.

The report said investigations have confirmed that Meiyappan was a team official of a franchiseee and he was in close touch with individual 2 with whom he had frequently meetings in his hotel room.

The report, supplied to different parties in the case, only revealed the name of Meiyappan, Kundra, Raman and Srinivasan. Names of other persons including cricketers were not disclosed as the per the apex court order.

On a day of relief for him in the match fixing issue, BCCI President in exile N Srinivasan today worshipped at the famous Rajarajaeswara Temple at Taliparamba in Kannur district in Kerala.

Srinivasan who arrived at the temple in the morning offered the ‘ponninkudam’, a major offering to the presiding diety Lord Siva.

According to temple officials, Srinivasan who was accompanied by some senior officials of India Cements, spent about 30 minutes in the ancient temple.

Famous personalities who have visited the temple in the past include former Tamil Nadu Chief Minister Jayalalithaa and BJP leader and former Karnataka Chief Minister B S Yeddyurappa.