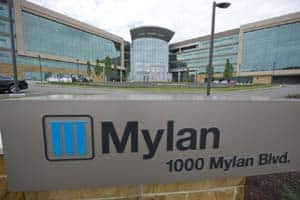 Mylan, which has its operational headquarters outside Pittsburgh, lowered its 2016 guidance for adjusted earnings per share by 15 cents, to a new range of $4.70 to $4.90 per share. That's below the average analyst estimate of $4.95 per share compiled by FactSet. (Reuters)

Not only that such a merger proposal by Teva would “bring each other little in terms of new capabilities”, Mylan said “bringing Teva’s ‘dysfunctional’ culture to the region (India) could disrupt the core of its business, result in the flight of key talent (in India and elsewhere), and meaningfully and adversely impact the results of the possible combination”.

In a letter written to Teva President and Chief Executive Officer, Erez Vigodman, Mylan Executive Chairman Robert J Coury said the Mylan’s board “will certainly not consider engaging in discussions to sell the company unless the starting point of the discussions is significantly in excess of USD 100 per share”.

“This valuation is consistent with a best-in-class asset such as Mylan and with one that has a strong foothold in India, which provides a highly competitive cost structure and a strong backbone for growth,” Coury said in the letter.

Mylan said it operates a complex and substantial business in India where more than 1,20,006 employees work, 21 manufacturing facilities are located, and a major R&D hub for the company’s global business is positioned.

Teva has a limited presence and experience in the country, and in fact has been ‘disparaging about India’s products and culture’, Coury said.

“This challenged culture at Teva is, we believe, a direct result of a Board of Directors that refuses to change, lacks adequate global pharmaceutical experience and consistently meddles in company operations,” he added.

Mylan has serious concerns about Teva’s ability to integrate and efficiently run a combined company, and deliver meaningful shareholder value, he said, adding “there is simply no track record for investors to find”.

Mylan said that after a comprehensive review conducted in consultation with its financial and legal advisors, the board concluded the offer from Teva did not meet any of the key criteria that would cause the Mylan board to depart from its successful and longstanding standalone strategy.

“Our board has a very important fiduciary obligation to protect the best interests of the company’s shareholders and other stakeholders, and has always been open to considering all paths forward in that regard, and this situation is no different,” Coury said.

“However, that does not mean we will entertain offers that grossly undervalue the company, and leave our shareholders and other stakeholders exposed to serious risk,” he added.

Last week, Israel-based Teva had offered to acquire Mylan for USD 40 billion in cash and stock to create a generic drug powerhouse to compete with rivals such as Sun Pharma from India.