A thing for thong

From lacy bikinis and G-strings to briefs and boyshorts, Indian men are challenging some of the most entrenched gender stereotypes by taking a fancy to exotic male lingerie 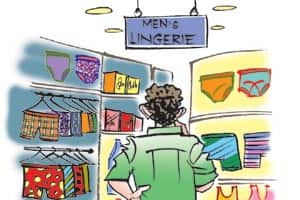 Indian men are challenging some of the most entrenched gender stereotypes by buying these sweet nothings. From lacy thongs and G-strings to briefs and boyshorts, they are doing it all to spice up their lives. (Illustration: Rohnit Phore)

THOSE WHO have watched the iconic American TV show Friends will immediately know what we’re talking about.

In a particular episode, Phoebe (played by Lisa Kudrow) convinces Joey (played by Matt LeBlanc) that men who wear ladies’ undergarments are not weird or gay, eventually making him try out a pair and see it for himself. It was a laugh riot, no doubt, but coming back to real life, the scene may not be too far-fetched, as several men have taken a fancy to these fashionable and alluring inner garments that were earlier strictly a domain of the ladies.

Enter male lingerie. Indian men are challenging some of the most entrenched gender stereotypes—assumptions that are rooted in rigid, age-old gender roles that dictate what men and women should wear, both in public and private—by buying these sweet nothings. From lacy thongs and G-strings to briefs and boyshorts, they are doing it all to spice up their lives.

Helping these male lingerie connoisseurs are websites and stores that are marketing these trendy undergarments.

Brent Krause, owner and lead designer for Homme Mystere, a male lingerie company operating out of Queensland in Australia, thought it would be a whacky idea to come up with intimate wear for men, taking the cue from female lingerie. “Women’s underwear in stores has always been bright and colourful. The fabrics are lightweight, stretchy, incredibly soft to touch. I wondered what it would be like to have men’s underwear made with the same fabrics and if it would be as comfortable as it felt to touch,” he explains.

Krause’s buyers include several Indian men, too, although all of them are discreet in their transactions.

Five years ago, Homme Mystere was perhaps the only store around, but now there are some other ventures as well that are trying to lure men with laces. Online stores like Laceandme, Teddygirl.com, Spicylingerie.com and Thatspersonal.com are selling kinky intimates for ‘angels in hot panties’. Animal-printed G-strings studded with snake heads and thongs with hints of pink are most popular.

But who are the men flocking to these online stores? “Feedback suggests that our client base is varied. Many are married and middle-aged, those who like to have a bit of fun. Professionals, techies, those in the armed forces—they are all our clients. There are women, too, buying for their partners,” says Samir Saraiya, CEO of ThatsPersonal.com, a premium adult online store headquartered in Bengaluru.

Designer Wendell Rodricks thinks the trend is bizarre. “The latest Gucci show at the Milan Fashion Week was in the news just because it questioned such stereotypes. But to call the product ‘male lingerie’ is rather bizarre. Let’s not take away from the feminine domain of lace and silk as underwear. I, for one, would not buy it.”

And, as per Krause, it’s not all gay men and cross-dressers either. “Apparently, there are many straight men out there who like to try out something new and thrilling. It’s actually none of our business. There’s no reason why a gay man would like lingerie more than a straight guy,” says Krause.

Talking about the genesis of his website, Krause says that after making a few samples of briefs, boyshorts and thongs, he checked if other guys liked the idea too. So, along with his wife, he started selling a few garments online. As the business grew, they received more and more enquiries from men, and they were soon pushing the brief, so to speak, talking about the possibility of making matching bras to those briefs. Krause discussed the idea with his seamstress and went ahead and created matching bras and other types of lingerie, ranging from$20 to $40, for men.

But why would one wear it? As per Krause, for men, it’s the nerve-racking taboo equivalent to a woman wearing crotchless panties to church. You sit there and wonder, “Nobody knows what’s going on under these finely ironed pants. What a frilly thrill!”

Krause wants to elevate the underwear in the daily level of priorities. “Choosing a department store brand of underwear each morning is a no-brainer. Choosing a style of Homme Mystere each morning is a little more fun,” he says. “A busy day with meetings? Let’s go for pinstripes. Feeling a bit toey? Let’s try frill thongs. Life’s too short for plain underwear,” he adds.

When some online companies sought to find out what the common man thought about the idea, a new aspect about Indian society was witnessed. As opposed to the common notion that people from metro cities would be more open and accepting, a majority of them from cities like Mumbai, Delhi and Bengaluru outrightly rejected the idea or found it too ‘gay’. On the other hand, people from smaller cities like Bhopal, Jammu, Jaipur and Nashik seemed more interested and open about it. So much for ‘small-town mentality’!

But what about women? What do they have to say about men in bras? “I think it’s ridiculous,” says Sonal Kalani, a 26-year-old entrepreneur based in Mumbai. “Role-playing and colours like red and pink are acceptable, but not panties and bras. I’d prefer my man to be a man, not some guy whose choice in innerwear matches mine,” she says.

Like her, a large section of women can’t take the idea of feminine underwear for their partners.

However, there are a few who think it’s admirable if a man does it. “Women do so much to please their partners. So if a man does something like this, I feel it will be really sweet. But wearing it outside the bedroom would be completely his personal choice,” says 25-year-old Ujala Choudhary, a media professional based in Jammu.

It’s just a matter of time before the masses become more acceptable. But who knows, you may just spot some fancy laces and satins, custom-designed for men, at the neighbourhood departmental store next time you visit.