Pakistani teenager Malala Yousafzai, shot by the Taliban for refusing to quit school, and Indian activist… 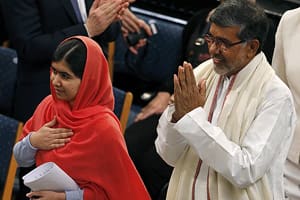 Kailash Satyarthi and Malala Yousafzai – an Indo-Pak, Hindu-Muslim ‘champions of peace’ – today received the Nobel Peace Prize for 2014 for their pioneering work on promoting child rights in the troubled sub-continent, as they made an impassioned plea to globalise compassion.

“Satyarthi and Yousafzai are precisely the people whom Alfred Nobel in his will calls ‘champions of peace’,” Chairman of the Norwegian Nobel Committee Thorbjorn Jagland said in his speech before awarding them the prestigious prize here.

“A young girl and a somewhat older man, one from Pakistan and one from India, one Muslim, the other Hindu; both symbols of what the world needs: more unity. Fraternity between the nations!,” he added.

Satyarthi, who gave up his job as an electrical engineer to run an NGO for rescuing children from forced labour and trafficking, said: “I refuse to accept that the world is so poor, when just one week of global military expenditure is enough to bring all of our children into classrooms.”

“I refuse to accept that the shackles of slavery can ever be… stronger than the quest for freedom,” said 60-year-old Satyarthi, who asked the audience to feel the child inside them and globalise compassion.

“Let us inculcate and transform the individuals’ compassion into a global movement. Let us globalise compassion. Not passive compassion, but transformative compassion that leads to justice, equality, and freedom,” Satyarthi said after receiving the award here at ornete Oslo City Hall.

Invoking Mahatma Gandhi, he said, “If we are to teach real peace in this world… we shall have to begin with the children.” ‘I humbly add, let us unite the world through the compassion for our children.’

“I represent here the sound of silence. The cry of innocence. And, the face of invisibility. I have come here to share the voices and dreams of our children, our children, because they are all our children,” he said, adding that the crime against children has no place in a civilised society.

Satyarthi’s NGO Bachpan Bachao Andolan (Save Childhood Movement) prides itself on liberating over 80,000 children from bonded labour in factories and workshops across India.

Satyarthi and 17-year-old Malala, who survived a near-fatal Taliban attack two years ago with determination advocating education for girls, were named by the Nobel Peace Prize Committee for the prestigious award on October 10.

They received the Nobel medal which is 18 carat green gold plated with 24 carat gold and weighs around 175 grams. They will share USD 1.1 million prize money.

Malala, who was nominated in the peace prize category last year also, became the youngest ever Nobel laureate.

In her speech, she said, “I am honoured to receive this award together with Kailash Satyarthi, who has been a champion of children’s rights for a long time. Twice as long, in fact, than I have been alive. I am also glad that we can stand together and show the world that an Indian and a Pakistani can be united in peace and together work for children’s rights.”

“I am here to stand up for their rights, raise their voice…it is not time to pity them. It is time to take action so it becomes the last time that we see a child deprived of education,” she said.

Recalling her speech at the UN, she said “One child, one teacher, one pen and one book can change the world.”
She dedicated the Nobel Prize money to the Malala Fund, to help give girls everywhere a quality education.

“The first place this funding will go is where my heart is, to build schools in Pakistanâ€”especially in my home of Swat and Shangla,” she said.

She said Martin Luther King, Nelson Mandela, Mother Teresa and Aung San Suu Kyi once stood on the same stage and hoped the steps that Satyarti and she has taken so far will also bring change â€“ lasting change.

“It is not time to tell the leaders to realise how important education is – they already know it – their own children are in good schools. Now it is time to call them to take action. We ask the world leaders to unite and make education their top priority,” she added.

Chairman of the Norwegian Nobel Committee Jagland said that violence and repression cannot be justified in any religion. “Islam, Christianity, Judaism, Hinduism and Buddhism protect life and cannot be used to take lives,” he said.

Echoing his views, Satyarthi said, “All the great religions tell us to care for children. Jesus said: ‘Let the children come to me; do not hinder them, for the kingdom of God belongs to them.’ The Holy Quran says: ‘Kill not your children because of poverty.’

“I refuse to accept that all the temples and mosques and churches and prayer houses have no place for the dreams of our children,” he said.

“I challenge the passivity and pessimism surrounding our children. I challenge this culture of silence, this culture of neutrality,” he said and called upon all the governments, intergovernmental agencies, businesses, faith leaders, the civil society, and everyone to put an end to all forms of violence against children.

“Today, I see thousands of Mahatma Gandhis, Martin Luther Kings, and Nelson Mandelas marching forward and calling on us. The boys and girls have joined. I have joined in. We ask you to join too,” he added.

(PTI) From 1901 till this year, Nobel prizes have been awarded 567 times to 864 Laureates and 25 organisations with the youngest winner being Peace Prize awardee Malala Yousafzai of Pakistan at 17 years.

By winning the Peace Nobel at this tender age along with India’s Kailash Satyarthi, Yousafzai beat the previous record of Lawrence Bragg, who won the Physics Nobel in 1915 at the age of 25.

The average age of all Nobel Laureates in all prize categories between 1901 and 2014 is 59 years.

Two most common birthdays among the Nobel Laureates are May 21 and February 28.

The word “Laureate” signifies the laurel wreath awarded to winners of athletic competitions and poetic meets in Ancient Greece.

In Greek mythology, god Apollo is represented wearing on his head a laurel wreath, a circular crown made of branches and leaves of the bay laurel.

The statutes of the Nobel Foundation say, “If none of the works under consideration is found to be of the importance indicated in the first paragraph, the prize money shall be reserved until the following year.”

“If, even then, the prize cannot be awarded, the amount shall be added to the Foundation’s restricted funds.”

On 27 November 1895, Alfred Nobel signed his last will and testament, giving the largest share of his fortune to a series of prizes in Physics, Chemistry, Physiology or Medicine, Literature and Peace.

Leonid Hurwicz has the distinction of being the oldest Nobel recipient at the age of 90 for Economics in 2007.

Till now, 47 women have won the Nobel while two Laureates declined the prize.

Jean-Paul Sartre, awarded the 1964 Nobel Prize in Literature, declined it as he had consistently declined all official honours.

Le Duc Tho, awarded the 1973 Nobel Peace Prize jointly with US Secretary of State Henry Kissinger for negotiating the Vietnam peace accord, said he was not in a position to accept the award, citing the situation in Vietnam as his reason.

Four Laureates were forced by authorities to decline the Nobel.

They, however, received the Nobel Prize Diploma and Medal later but not the prize amount.

(PTI) Here is a look at this year’s Nobel prize winners.

Peace: Presented jointly to India’s Kailash Satyarthi and Pakistan’s Malala Yousafzai for their struggle against the suppression of children and young people and for the right of all children to education.

The two will split the Nobel award of USD 1.1 million.

Satyarthi, 60, gave up his job as an electrical engineer to run an NGO Bachpan Bachao Aandolan (Save Childhood Movement) in India for rescuing children from forced labour and trafficking while 17-year-old Malala survived a near-fatal Taliban attack two years ago for advocating education for girls.

Literature 2014: Given to France’s Patrick Modiano “for the art of memory with which he has evoked the most ungraspable human destinies and uncovered the life-world of the occupation”.

Physics: Given jointly to Japanese scientists Isamu Akasaki and Hiroshi Amano and Japanese-born American Shuji Nakamura “for the invention of efficient blue light-emitting diodes which has enabled bright and energy-saving white light sources”, a breakthrough that has spurred the development of LED technology to light up homes, computer screens and smartphones worldwide.

Chemistry: Awarded jointly to Americans Eric Betzig and William Moerner and German scientist Stefan Hell “for the development of super-resolved fluorescence microscopy”, a new method that let microscopes see finer details than they could before.

Physiology or Medicine: Divided, one half awarded to US-British scientist John O’Keefe, the other half jointly to Norwegian husband-and-wife duo Edvard and May-Britt Moser “for their discoveries of cells that constitute a positioning system in the brain”, revelations that could well lead to advances in diagnosing Alzheimer’s.

Economics or The Sveriges Riksbank Prize: Presented to Frenchman Jean Tirole “for his analysis of market power and regulation”, which shows how regulators can manage markets dominated by a few powerful companies to keep them from blocking competition and overcharging customers.