Large numbers of IT workforce unfit for new-age tasks

A Nasscom report estimates that about 40% of India’s total workforce must be reskilled over the next five years to cope with emerging trends such as AI, IoT, machine learning and blockchain. 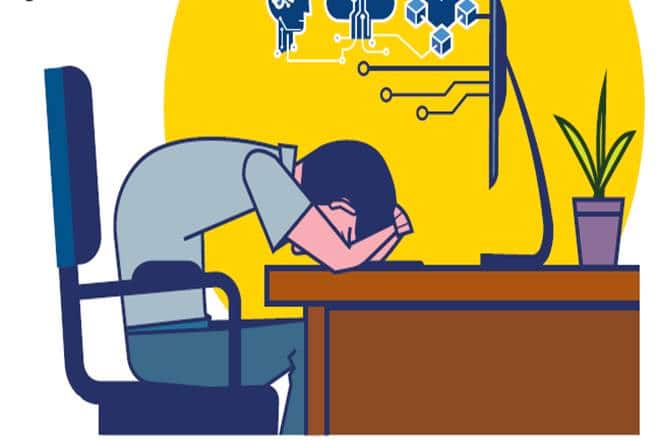 IT firms are rebuilding their teams to cater for emerging technologies. (Illustration: shyam kumar prasad)

At least a third of India’s information technology workforce, or roughly 10 lakh engineers, may be unqualified to cope with the rapid advancements in the field of software technology, say HR consultants.

Industry experts caution that unless engineers are able to upgrade their skills, they might find themselves unemployed. The most vulnerable section is that of mid-level employees, which by some estimates, accounts for 20% of the total IT workforce of roughly 3 million. Sector experts say just a fraction of these six lakh employees may be able to acquire skills relevant to new and advanced technologies. The rest of them are unlikely to be able to fit into roles that require knowledge of artificial intelligence, internet of things (IoT) and cybersecurity.

Yeshab Giri, head, (technologies and specialities), Randstad India, told FE that IT companies are looking to cut their workforce but, at the same time, they would like to be humane. Indeed, at a time when business isn’t exactly booming, many companies are in any case trimming workforces and the first to go are those who can’t be reskilled.

A Nasscom report estimates that about 40% of India’s total workforce must be reskilled over the next five years to cope with emerging trends such as AI, IoT, machine learning and blockchain.

IT firms are rebuilding their teams to cater for emerging technologies. Infosys, for instance, is reportedly letting go of around 2,200 employees at the senior manager level, while Cognizant said recently it would let go of around 7,000 people in mid- to senior-level roles.

Pravin Rao, COO, Infosys, told analysts recently the attrition level for tech services is about 19.4% – both voluntary and involuntary. “If you look at voluntary alone it is about 18%,” Rao said, which suggests involuntary attrition would be to the tune of about 1.4%. New technologies — analytics, cloud computing, IoT etc are increasingly contributing more to revenues, though the biggest chunk — 60-70% — is still earned from areas of application development, maintenance and verification among others.